Heaven of the South 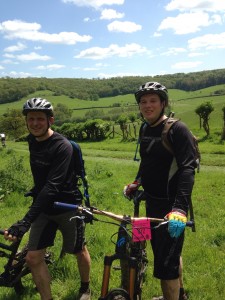 The dynamic duo turned up ready for action in beautiful sunshine in the Cotswolds on Saturday. The riding was ace and there was not a towpath in sight!
It must be said that the BCC representation at this event was somewhat underwhelming but quantity was made up for by quality (well our bikes are nice anyway). No mention in this editorial will be made about the BCC rider who failed to be able to tell the days of the week although his middle initials are not short for Totally Clever.

We set off on the mass start having eaten quality rider energy food (read bacon bap with brown sauce) with the final instructions from the course organiser ringing in our ears "Don't die and now PISS OFF!" ..... I think we were clear about this.

The route itself consisted of a large circular "lap" of about 56km plus 3 additional loops which were options along the main route. Batman and Robin (or is that Dumb and Dumber? - other duos are available) opted in to the first extra loop which was a very pleasant forest singletrack. However there was a slight technical issue with a rear wheel. It began to shed spokes and resemble a Salvador Dali impression of a wheel so the decision was made to avoid too many further dramas and avoid the future extensions.

This did not detract from the enjoyment though as the route had quarries, woods, grass, singletrack, badger sets, doubletrack and loam aplenty. Surprisingly there was mud too - the really thick sticky sort which demanded a combination of luck and speed to plough through. Some were more successful than others but BCC riders stayed on board their bicycles despite the best efforts of the terrain (and occasionally other riders) in trying to unseat us. Riding in company always leads so some mysterious behaviour which brings out the MTB snob in me.

Why do people brake at the bottom of a hill when momentum will take you up the other side?

Why do people push downhill?

Why do people not give warning about braking?

One unfortunate rider did manage to come a proper cropper on the first descent and somehow managed to break his hip and some ribs. He was well looked after by riders and medics and taken to hospital.

We arrived back in 5.59 hours returning an average speed of over 10km p\h including mechanicals and bananas.

A great friendly sociable event ridden by riders of many styles in a fab location.

Can't wait for the next one.