This month "Spoons" was treated to it's first proper thrashing at the hands of a TickerTape mix-up.

With a specially routed top section boasting a new loose and very fast 'S' bend then the usual mix of rocks,  steep rooty tech, off camber and the deceivingly tight last few corners the course favoured no-one and tested all.

At well under a minute mistakes were costly yet the the urge to set a good time remained infectious with banter picking up as the day went on and people did or didn't live up to all that pre run talk. 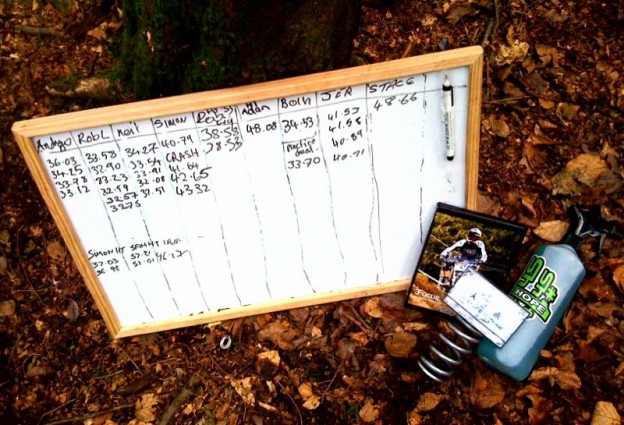 Entertainment came in the form of big bird who was suffering the effects of 10 hrs of manual labour the day before (that's right some of us started digging at half seven!) though he wasn't the only one with others finding new ways to use their bikes, most of which looked like they were attempting something from the karma sutra!

Ben Irons had a lot to live up to with his renowned hardtail skill and new found head weight advantage (due to not having any hair - see post below), but simply failed to deliver.  Was the pressure of all that expectation too much? How do you sustain the success brought about by the underdog when you become the big dog? Either way Ben will be back, he's got it in him, and if the duct tape holds so does his bike.

Neil Cousins had made no bones about the fact that he intended on taking the crown, and to be honest did a bloody good job of making that happen with his smooth calculated style. Neils got a real race head and now no doubt a slightly bigger one. Rob Lewis, who has in the past been more renowned for taking his own straight line down the hill was the only person who looked likely to challenge Neil at the top. Despite riding with the massive (and completely unfair) advantage of marshmallow tyres he didn't quite manage that perfect run though looked mighty quick through the roots and bottom turns.

I was third but then who cares about the second loser?!?!

Simon Bartlett showed everyone what the day was all about with his committed and progressive style and so was rewarded with the first choice of the two prizes (A Bottle of Hope Sh#t Shifter and 3focus DVD) for "giving it plenty of beans" and Stacey Dunstan won the "Lucky Bastard" award on account of being picked out of a hat (well actually banana guard). It should be mentioned that Stacey was also a contender for the beans award even though he only turned up with an hour to go - with his race face and 60000psi he managed to get to know the ground conditions pretty quickly (with his face) but then made some real progress once down to a more rideable 40psi and were it not for the 3pm cut off would have made the biggest time improvement of anyone.

Tom was taking photos of the day as part of our new fund raising venture BCC Photography, check out his unedited low res snaps here (the pic of rob above is one of his post edit) all of which are availible for purchase (see forum for details) with all proceeds going to fund our trail building activities.

A great day with plenty more goings on and many more riders than I can mention (and than in the photo).... roll on next time! 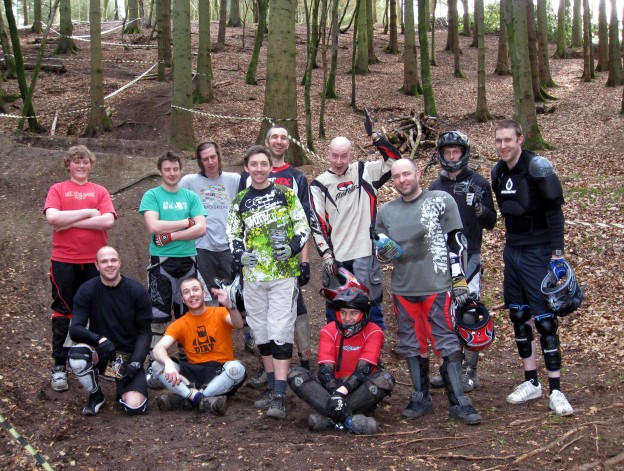