As a club we have members that do all kinds on bikes. From a regular little loop in the woods every weekend, to multi-week epics across the Himalayas. Sean took the later option and came back with reports of hill even bigger than Clay Hill...

There’s a logic that can be applied to mountain biking, bigger is better. Local trails are great, bigger hills are better, Lakes / Snowdonia / highlands and the like are better still, and then there’s the Alps which are even better than all of that lot, if only because they are bigger still.

So the best must be the biggest; Himalayas = biggest = best?

With this simple logic I wound up in Kolkata (Calcutta) to meet up with an ex-pat biker, and a smattering of locals and gringos with a plan to spend a couple of weeks exploring one particular part of the Himalayas.

A word on Kolkata, mental.  A few more words; Home to 15 million odd folk (around a third of the population lives in unregistered dwellings, so it’s a guess how many people there are), once home to the Raj (plenty of old colonial buildings around), and  Mother Teresa (only other western faces I saw were some nuns), and some interesting smells (I discovered a whole new spectrum of smell that until then had been outside of my experience, the type of smell that is physical, slaps you in the face, punches you in the gut and walks off with your wallet). I loved it, a happy couple of days stuffing my face (40p for a main meal!), getting to know the local booze and generally living it up. 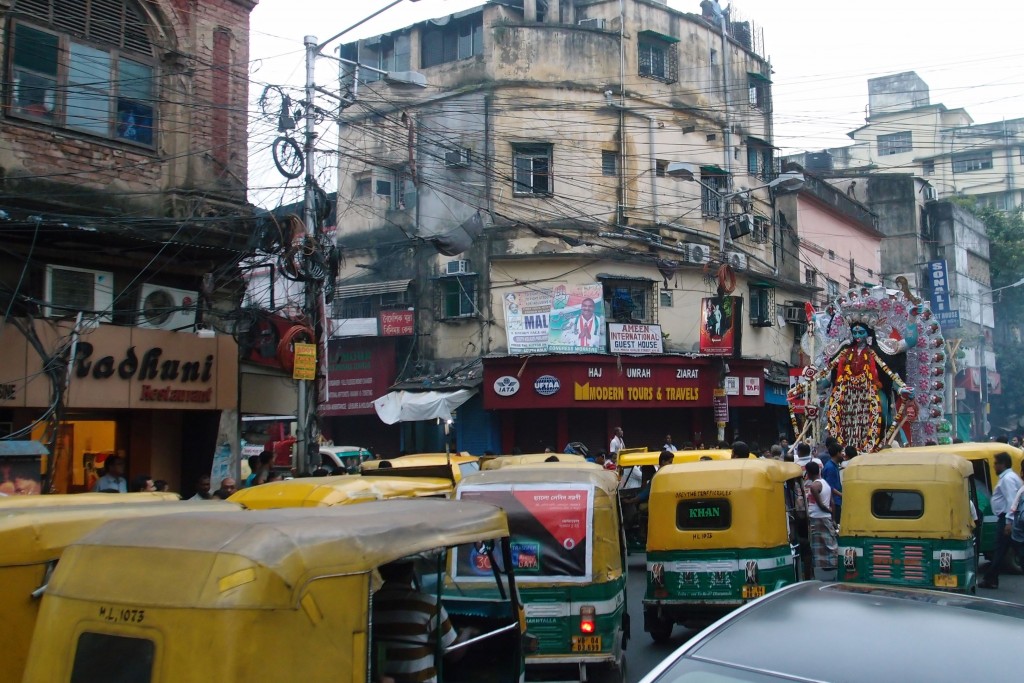 After a couple of sweaty days in the smoke, time to head off to the hills – this meant getting a sleeper train from Kolkata’s central train station to Silguri  - you just have to read onto the next paragraph, we had to get us and our stuff onto the train. That was quite an experience.

Silguri  sits on the Bengal plains at the base of the Himalayas – here we were met with the slightly surreal experience of standing in a hot and dusty city, staring at Kangchenjunga, the 3rd highest mountain on earth.  Our ride from here was some local drivers and their Indian 4 x 4’s who whisked us off to Kurseong hill station (I felt slightly lazy driving up-to 2000 odd meters, but seeing size of what was to come, that soon faded!). Base in Kurseong was the former home of the Colonial tax collector, who must have done well for himself by the look of the place – bikes unpacked we headed out for a shakedown ride through the local tea plantations, steep and loose plenty of readjusting brains to riding, and quickly learning that tea bushes do not make a soft landing (tough buggers, will strip skin quicker than sandpaper). 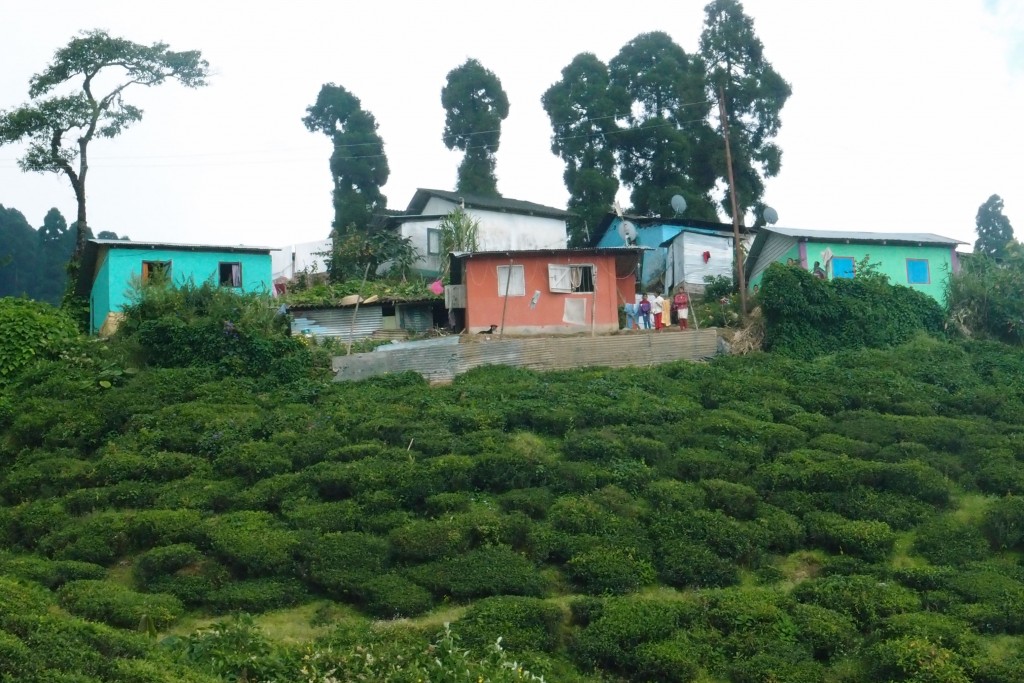 Still luxuriating in the fine surroundings we headed off the following day for Darjeeling – heading off in clear blue skies we slowly made our way up higher into the surrounding hills, riding was a mix of jeep tracks (up) and forest singletrack (along and down), so not a big culture shock.  Lunch stop we were introduced to Mo-Mo’s (Nepalese dumplings), we ate a hell of a lot of these over the course of the trip, just as well they were delicious, and came with hot chilli sauce.  Leaving lunch stop someone mentioned the ominous black clouds (that we’d done a good job of ignoring), sods law that not long after leaving the lunch hut it started to rain, and then it really started to rain, then lightning and hail.*

Clearly it wasn’t going to stop soon, so head down and get a lick on, least that’s what me and Mike (who organised things) thought, after 20mins of hail so thick it made any progress impossible we stopped and waited for the others to catch up. Then we waited some more – by which time I was beyond cold, no choice but to head back and find them, we turned around and rode back along what was now a boiling torrent of a river, the others had stopped at a small temple, I was so cold that hypothermia was kicking in, so  dispensing with formalities and in finest anglo saxon told them I’m off to Darjeeling, they can suit themselves.  We were only a couple of hours from Darj, but that was a long two hours. I’ll never moan about being cold again.

*We got caught in the tail end of the same storm that killed 43 trekkers in Nepal. It’s an entirely predictable system, where storms in the Andaman sea track across the Bengal plains and up and over the Himalayas. This predictability makes the loss of life all the more sad. 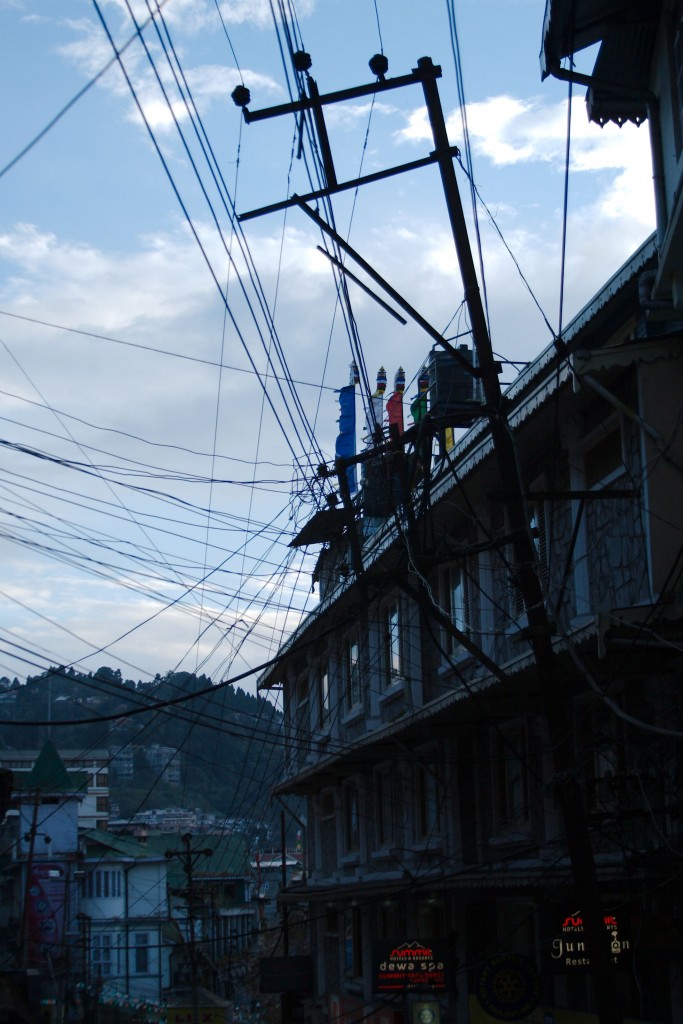 As this is in danger of turning into a travelog – I’ll just say that Darjeeling is a fantastic place, if you ever get the chance, you’ve got to go. The other things of note is there is a great chemist where you can get medications over the counter, so we stocked up on a huge array of drugs, I also picked up a cheap down jacket (£8!) – both would come in handy. The rest of Darj is a blur of booze and festival, which ironically was dry, so we weren’t officially allowed to drink anywhere.

Leaving Darjeeling we were heading up into more isolated terrain, so dumped as much kit as possible, carrying only the bare essentials that would see us through the next 5 days. (I got it down to riding kit, jacket, leggings, book, torch, toiletries, and a single pair of pants!)

Riding out of Darjeeling we headed up Tiger hill (popular tourist spot cos of the views – they failed to mention the awesome singletrack) – and into the forest that surrounds – were it not for the occasional monkey, it could have been Canadian North Shore, think big trees, big roots and very technical drops. 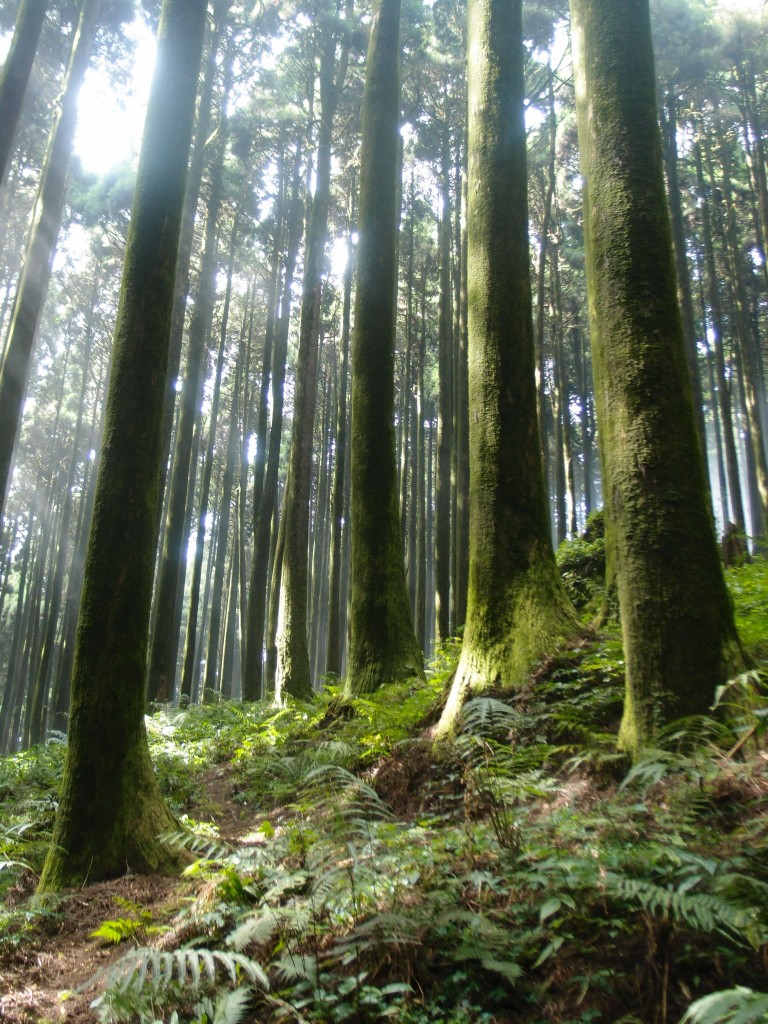 After a few hours of this sublime riding we started heading down, and down, and down – given our night stop was higher than Darjeeling, there would be an inevitable climb…  I’ve done some long climbs in the alps, I think this trumps them all; brutally steep and rough it just went on and on – fortunately we had dropped down so altitude wasn’t an issue – the rain however put in a re-appearance just to make sure that it wasn’t too enjoyable.  With a mo-mo and sweet tea stop it took most of the afternoon to climb back up and onto the border of Nepal. By the time we reached our high point it was distinctly dusky, as we rolled off for the 2km descent* to our night stop, it was pitch black – a petzel head torch is next to useless on a bike, but we made it to Tumling and rest.

*We rode back up this descent in the morning, good job it was dark, I’d of thought twice about riding it in the light!

Night times generally revolved around two things, alcohol and fire (no electricity in this part of the world). In Tumling the locals introduced us to Tongba   Might have been the altitude, or the company, but I can say it’s one of the finest beverages I’ve yet had the fortune to try, and being the sensible athletes we are, we certainly didn’t stay up late chain drinking them and swapping manly stories. 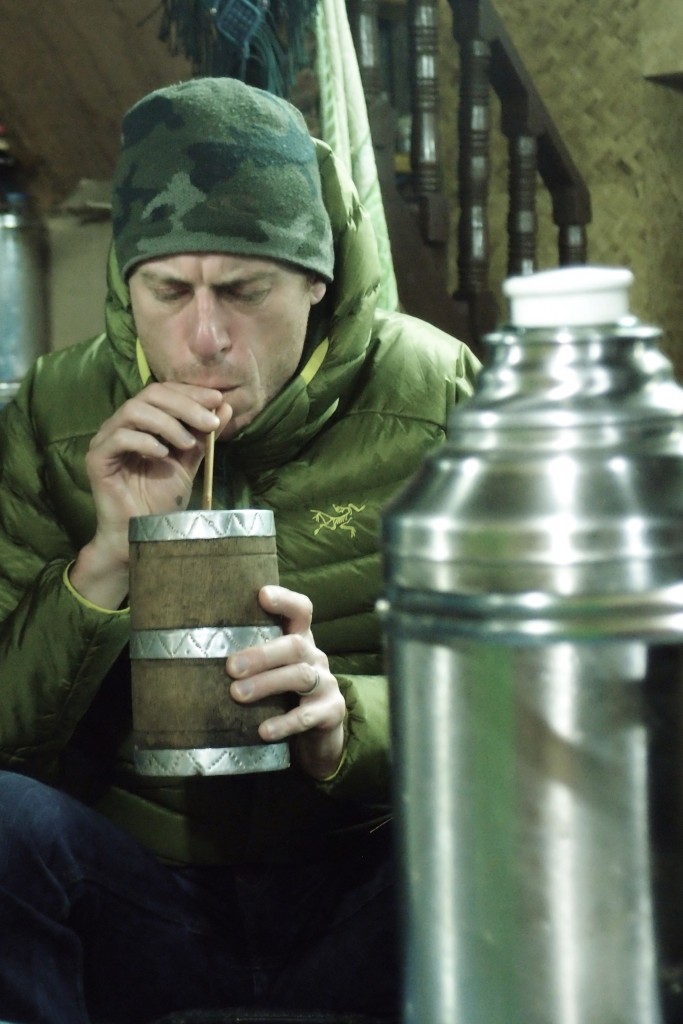 One thing I hadn’t experienced in India yet was a proper night’s sleep (apart from the train) – Tumling was no different, so with dulled senses intact and a hangover, set off for the high point of Sandakphu.

Things started to get decidedly tough going. Altitude – wisdom states that above 1820m (very specific?) the effects of altitude can be felt, as we climbed higher and higher oxygen was 60% of what we enjoy at sea level, let me tell you, that 40% makes a hell of a difference!  The same wisdom advises that you should avoid alcohol, unnecessary exertion, and not sleep at altitude  (so that’s us buggered then), should also avoid unnecessary medication, at least that’s one point for me! (for now).

As we were above the tree line, the riding had more of a big mountain feel, surrounded by towering peaks and panoramic views (choosing to avoid the few ominous clouds) – it was what I had imagined it would be like.  Things out here are pretty wild, but despite this there were dotted around small villages usually around temples – oddest of which must have been black lake (below), clearly this is a special spot (and it definitely was – pics don’t tell the story), as some enterprising individuals had built ornate walls around the place – with no purpose that you’d normally associate with a wall (like being attached to anything!). 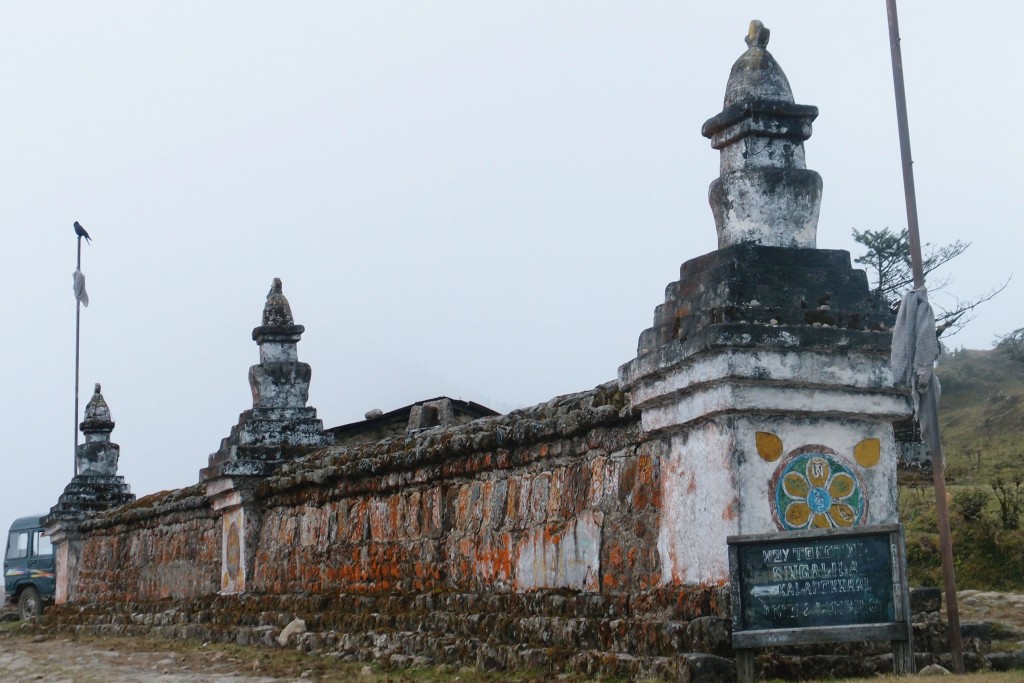 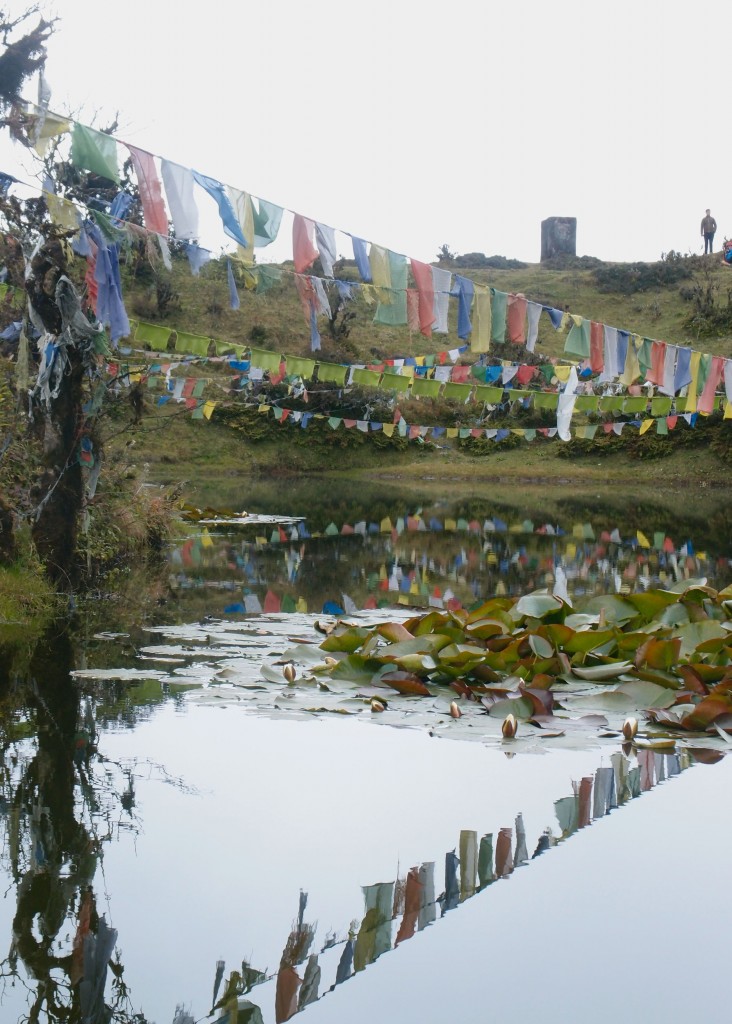 We dropped into Nepal at this point, and despite there being no visible reference (elsewhere there are army check points dotted around), the terrain changed significantly, much steeper, wilder – pick a line, any line and hope!

Remember I said this place was big, despite having climbed the whole of yesterday, it was getting late in the day by the time we reached our Sherpa hut, rest and food.  The promise for all this exertion was that in the morning we’d witness something that would be truly un-forgettable.