As with any traumatic experience those who share it end up feeling closer, as if a special bond has been created, and this is often the case with kidnappers and their hostages. But I can safely say that having endured 12 hrs of dance music I don't feel remotely close to the DJ, at all, In fact I'd...(rant)....

But then that's the theme of any endurance event; coping with something for a long period of time. What's interesting is how much stuff you actually have to cope with, stuff you didn't even think of: That annoying creek on your bike. The dark spot on your light. The way your camel back doesn't quite sit evenly on your back. The way the tent smells of bad guts, or the terrible music that finds it's way into your brain and repeats itself like a bad onion bhaji.

Under these conditions you learn a lot about yourself and those around you:

and I learnt the importance of taking tactical poos.

Aside from all this learning some of us were just getting on with riding, and doing a great job! Although not a BCC team, we're taking credit for our 50% and so were thrilled that TFTunded Shox managed 2nd/5 in their class (Mixed Team) and Steptoe and his Sons collectively managed 8th/33 in theirs (Male Team). Though I'd all like to point out that had Chris spent more time pedalling and less time fondling his new bike we might have come top five! (And no we don't want to smell it!)

Less praise should be given to 'Pigs in Space' who tested the old adage that "it's the taking part that counts" by coming last in their class; all I can say is that you should have let Rob do three laps back to back! Seriously though well done guys, all but one of you were being broken in and yet it was that one who seemed the most broken come 6am"...no I'm not bloody goling out again!..." said captain Rob showing that all important team spirit.

Other friends took part in the form of Live 2 Ride (teams 1 and 2), Tim Flooks, Sam Humphries and the team with no name (Chris Snell and Co). Apparently Sam did quite well though no body actually saw him ride. Sure we all witnessed his John Wayne impression during prize giving, but anyone can waddle Sam, that doesn't make you a winner!

The only sad thing is that we have to wait so long until the next event.

Will we see a bigger ezup village from team BCC?

Will Adam beat his 51 hr record?

Will Neil and Chris stop walking around in their Lycra?

One thing's for sure though; Set 2 Rise is fast becoming a classic. 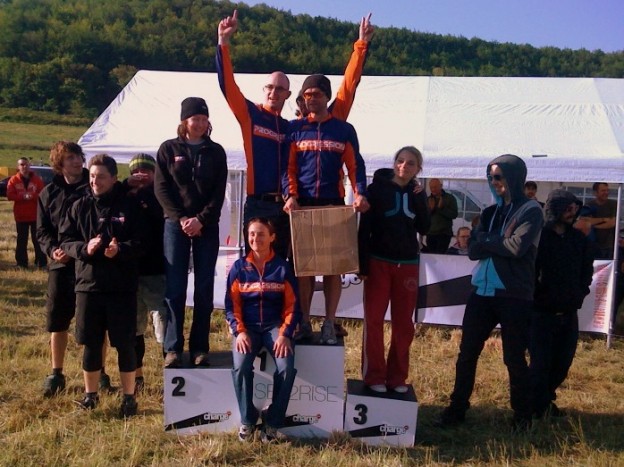