It's all about matching kit! 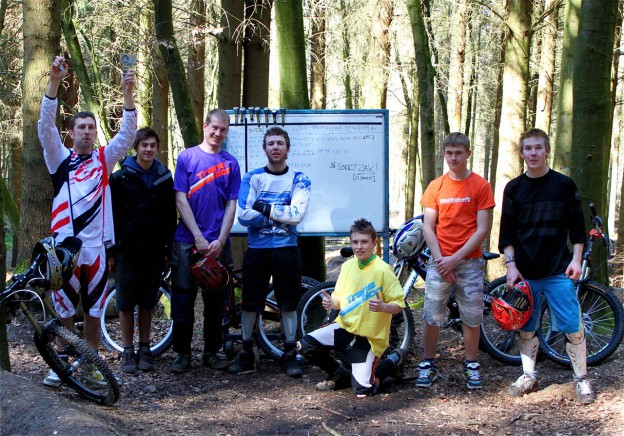 With so many people away, revising, at work, hung over, injured or just all raced out from the national, and easter weekend at molfre this months TickerTape was at risk of being a little dull. Sure the trails are ace, and the prizes flipping lush as always...but would anyone show up???

Well they did, not many, but just enough to make for an epic afternoon of sweat, dust, midgies, speed, and the odd high speed front flip attempt.

Bob Darvill surprised everyone with his total disregard for his own well-being - hitting everything in sight but never quite landing smooth,like his bike was a bucking donkey!

Ben Lovell's been putting in loads of riding recently and it certainly showed... looking fast on every section and carying loads of speed through the corners.

Big bird put in a short appearance but managed to set a good time right at the end, closing in on the faster times but now being chased by Ben lovell, meaning that the mid pack battles are now between Stace, Jim, Ben, Burd and Robin so expect to see some trash talking at the next event.

Will Hardy put in a whopping 13 timed runs, each time improving on the last and looking super fast down from the rock garden into the slam berm.

Ben Irons was flying the hardtail flag high, only being robbed of the second place on his last run due to a sudden and overpowering urge to try and do a front flip in sight of the finish line.

Chris Smith turned up earlier than anyone else, hoping to put in a few cheeky practice runs in his new matching race kit. Word on the street was that Chris was out for the course record and so was pulling out all the stops, new kit, new tyres and a new haircut too. He didn't disappoint either, putting in a blistering 45.33 in the dying moments. All I can say is that he must have cheated, sure he's a great rider, and yes he's fast but I swear he did something funky to his freelap watch (what do you mean I'm bitter?)!

I managed to make up the numbers, riding with some gypsy style for the first half of the event and then on my all out run at the end locking up the rear a fraction too much on a corner coming to a stop then starting again in a tough gear. I say that, but while I would have been quicker I wasn't close to Chris's record breaking time.

So, beans were awarded to Will for treating it like a flipping enduro, Ben Lovell for showing us all up with his rate of progress, and Ben irons for his grit and determination. His showy, suspense filled time revealing antics helped too.

Special thanks to Max Bikes PR, Transition and Dakine for the prizes! 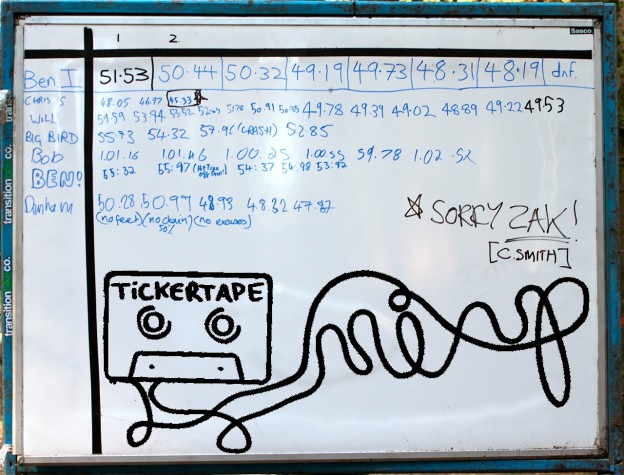