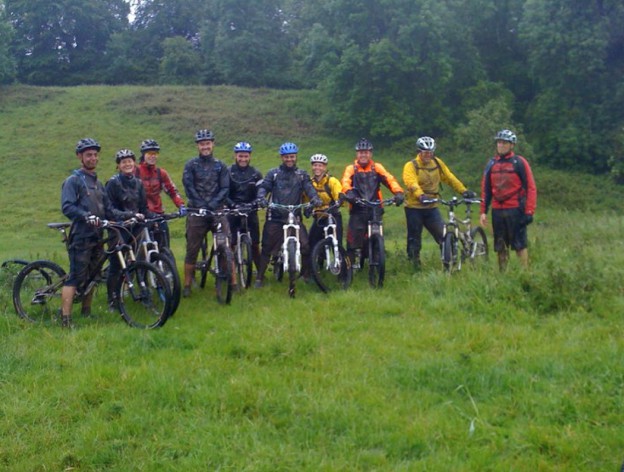 The wetter the better

Sunday morning, 7.30am. Outside the Cheese & Grain. It's raining. Really quite heavily. Five cars had assembled ready for the short trip up the A46 to Wotton-under-Edge, there to meet with a couple of members of Edge MTB Club for a guided tour of the South Cotswolds.

Pink? A pink bike? Surely CHAS wasn't coming too? Forecast for today's ride was for prolonged rainfall. Occasionally heavy. Chas is allergic to rain, isn't he?

His noble appearance aside it was certainly an impressive turnout of 13 BCC riders for a wet Away-Day. A few noticeable - but unavoidable - absentees would have boosted the numbers yet further. Kudos to us lot.

Under an hour later we assembled in Wotton-under-Edge's long-stay car park, the less-hardy members of our group (*cough* Chas *cough*) staying in the cars for as long as possible, while the more waterproof among us pfaffed with bikes in damp preparation.

Kev set a new Personal Best in puncture acquisition by managing to get a flat tyre while secured to Paul's car roof.

Soon, Simon and Phil from Edge MTB Club appeared, and all 15 of us headed off up through the nearby woods. To say it was wet is something of an understatement. The sunshine, warmth and bone-dry dusty singletrack that a couple of us had enjoyed during Heaven Of The South just a few weeks before had vanished. Instead there were all the hallmarks of winter: cold, lashing rain, strong winds, deep puddles, mud everywhere, dicey descents and traction-less climbs. If it weren't for the trees in full-leaf you could be forgiven for thinking it was January and not mid-June.

That said, we did enjoy darting through the maze-like network of trails in the woods en route to a 'play area', via an open section with a folly where – on a clear day, I'm told – the views are staggering.

The play area was an old, small quarry with interesting little routes and features all over the place. A deep plunge followed by a Double was attempted by a few, but only cleared by Will. A couple of other would-be DHers managed to land safely but unintentionally one-footed.

A long descent down to the village of North Nibley followed. The muddy, rutted slope proved too much for excitable birthday-boy Kevin as he hit an unexpected patch of clay at speed and parted company from his bike. At the bottom the situation was reviewed and it was decided a trip to a Minor Injuries Unit was probably a good idea. First-aiders Mark and Andy tended the patient's wounds - a deep cut to the knee and some lesser ones to his shin. Here, we decided to split. After wrapping Kev in two space-blankets, Paul and Phil (guide) headed back to Wotton to fetch Paul's car, while Chas stayed with Kev at the bottom of the exposed bridleway. Eventually, a nearby house took pity on the shivering, soaked pair and let them shelter in their double-garage.

Paul, Chas and Kev headed back to Trowbridge MIU where, after treating his wounds under gas-and-air, it was suggested Kev may have broken his ankle. No x-ray facilities in Trow Vegas, so, referral in hand, Chas and Kev headed off the RUH in Bath. A lengthy wait there, but the x-ray thankfully showed no broken bones.

Meanwhile, with much more of the route to ride, the other eleven cold, wet, muddy bikers carried on riding. Shortly into the ride, a few of the guys requested some hills to get the bloody pumping... they were not disappointed and the heat finally resumed to their bodies. Just a short ride on tarmac led them on to a gravel fire track winding through a wooded single track. Every ride has awesome views and Wooton-under-Edge did not disappoint as they scooped the edge of the town's golf course near Stinchcombe. They ploughed over the undulating fields coasting every bump, dip, and descent, a true WAHOO moment!!

Many tree roots lined their path but gave little resistance to their ride. However, a number of slippery slopes were a little challenging for some riders and Leanne took an unscheduled slide on her butt cushioning her bike on top of her, very professional biker move... always protect the bike!

Phil aimed to please all by suggesting a section of jumps and technical riding for a few of the down hill guys while the rest of them had some munchies.

After shaking the adrenaline off, it wasn't long before they re-entered the town of Wooton-under-Edge. Eleven gritty eyed, squidgey toed, soggy, muddy bikers began an extensive babywipes clean-up operation to make themselves presentable for some well-earned drink and food.

Enormous thanks to Edge MTB Club. We will return!