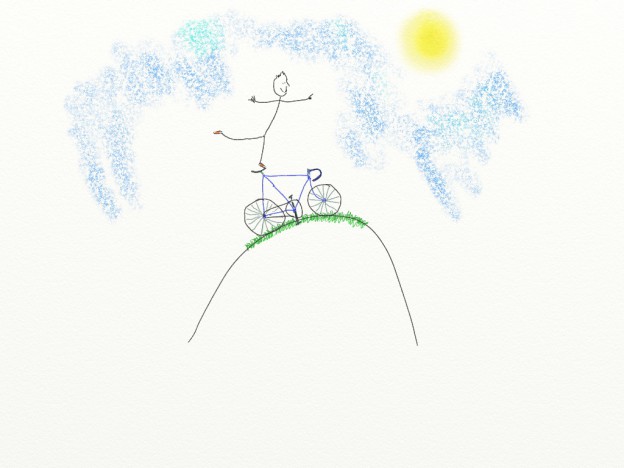 The last few days have been particularly windy. I prefer to say ʻblusteryʼ which always reminds me of Winnie the Pooh. On Tuesday evening I set out towards East Woodlands for the weekly club Nightrider; Roads were damp, Cannimore was squidgy and full of puddles, evidence of other adventurous cyclists wiggling around ahead of me to avoid the worst. My lights were on from the start. It didnʼt feel like summer, a far cry from the dusty memories of two weeks ago.

Today things were much the same, except my knees ached. I stumbled out of bed at a spritely 6:30am, saw the veil of mist outside and semi-consciously wrote-off expectations of a ride. Again, mainly because of knee pain (they could do with a good rest) but also because I knew there was a solid day in the study to be had, pimping my CV. I say study, itʼs the room with a computer. And a tumble drier. But thatʼs beside the point.

That went really well so I decided a reward was in order, and bit of relaxation. Enter the bicycle. In the spirit of ʻtaking it easyʼ I opted for the cleaner of my two cycles; the fixed gear. Shoes on, helmet, iPod, and Charge Bikes T-shirt (essential fashion requirement). The roads were now mostly dry (about 4pm) thanks to the wind that made my jacket sound like a helicopter landing on my shoulders. The list of qualifications and employer references faded into the muddy banks on route to Centre Parcs, replaced by the happy notion that I wasnʼt going to get soaked. I took the scenic route up to Heavens Gate, using the wiggley drive up to longleat instead of the straight one and cutting across from the toll booths. Sometimes itʼs nice to listen to sounds around you in the forest; itʼs peaceful. Not today though, the wind covered almost everything including Jay-Z who made frequent appearances through my headphones.

There is a strip of tarmac that joins the Heavens Gate view point to the main Longleat entrance road, which I have decided to adopt as my fixie training ground. It ticks all the boxes: Flat - yes. Road - yes. Devoid of traffic - yes. Quite often there arenʼt many peoople around either which makes falling over and looking silly more enjoyable. My goal is to learn how to ride a bike backwards while sitting on the handlebars. Iʼm not sure if itʼs backwards or forwards; the bike is backwards, but Iʼm going forwards. Iʼm willing to compromise and just call it sideways; most of my practice runs go round in circles.

Itʼs nice to have a spot where one can focus and perfect ones art free from distraction. Just like the study for editing important documents. Like Heavens Gate for fun and trying alternative riding styles. Some day Iʼd like to ride home like that.

6pm. I sat on the bench and watched the rain float over from Frome. Time to put the kettle on. So I set off home again along my scenic route, knowing I probably would get soaked after all, but that wouldnʼt matter because Iʼd had a really good day and there were at least five types of cheese in the fridge.