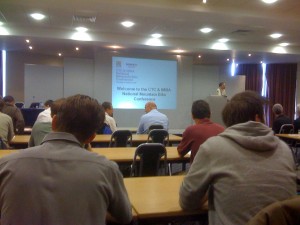 Just back from London, been a really long 24hrs but has been very productive. My experience of public transport was tainted first by a crafty bus driver who decided it'd be funny to tell me to take a bus that definitely didn't go where I'd expected and the fact that I spent most of my journey to earls court this morning running after the 171 bus until enough people had got off it to let me on.  When finally there I was greeted by tea and biscuits and lots of people from the MTB world - I however was a panting mess.

The conference was great with some fantastic speakers and lots to learn for even the most experienced delegates who, like me, looked hypnotised throughout.

I'll give a full write up over the next few days but will try and capture the main messages here and now...

It seems that the key topics were sustainability of both the physical trails, supporting infrastructure and human input. It is essential that this topic is addressed by lots of planning and foresight. Another topic was accessibility of the sport, and how retaining this element is critical to its success and ultimately its survival. This was illustrated by the fact that the vast majority of mountain bike owners don't mountain bike, yet most probably would if suitably trails were built with them in mind, as has been proved by various case studies. Attracting these inexperienced novices into the sport is the fastest and most effective method of building it's strength. Finally the issue of impact, and ultimately a reminder that despite the best of intentions trail projects can result in very negative impact to the surrounding area in terms of physical impact but also and social and economic. And lots lots more; all of which can be related to what we're doing in some way.

I was lucky enough to speak to Ian Warby (CTC), Dafydd Davies MBE (world renowned trail builder and consultant) and Paul Hawkins (Forestry & woodland renaissance), and have learnt a fantastic amount as a result. I am pleased to say that Paul Hawkins was just as enthusiastic to meet and discus our proposal of a Longleat trail development as we are. Paul was really friendly and has inspired me to work even harder for this as there is so much potential especially when you look at the bigger picture of potentially linking such a trail with sustrans networks etc (he also said that he'd seen our website and really liked it!).

I must admit to being too tired to get my thoughts down clearly but I promise to give a full write up soon.

My eyes have been opened to what is possible and sights set higher as a result - today has been a great day.