Blown away in the Peak District (part 1) 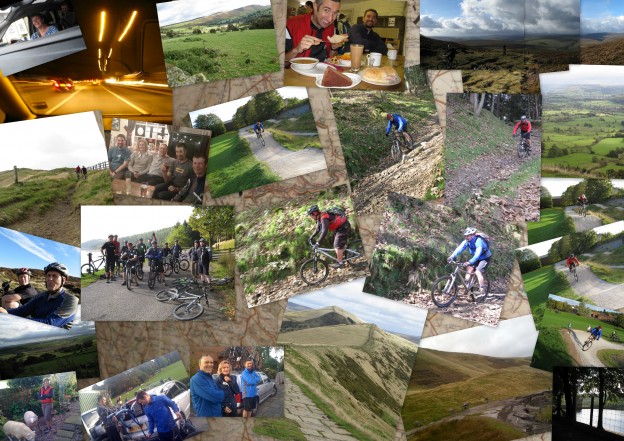 My friend Molly, a shiny new singlespeed 69er and gale force winds greeted our arrival in Hope. The wind wasn't unexpected and fortunately was blowing from the least worst direction. Unfortunately it did mean a headwind slog along the road to Castleton, up the broken road and around the back of Mam Tor, but at last we were riding! With the slog behind us we were practically blown up the last part of the climb, before descending down a tricky rutted trail with what feels like a million different line choices. This was just an appetiser.

A short blast over some flag stones (Roman North Shore?) and we were at Hollins Cross, the top of one of the best descents in the area. A rainbow formed for a split second as the sun fought with the drizzle. The sun won and we continued down a similarly rutted trail, this time with a few rocks, small drops and tighter turns included to test our nerve. The wind did its best to push us off line and but for a couple of tumbles everyone made it down in one piece. Everyone was stoked on the trail and tales of near misses and new challenges were shared as we cruised the short road section. The route took us along a wide bridleway which climbed and fell as it weaved its way through two streams up to Hope Cross and the beginning of the beast.

There are many trails which people have named the beast in the Peaks, but in my view this one is the definitive beast. Imagine the rockiest descent you can and times it by 10. From top to bottom you are surrounded by trees, trapped in a wide channel covered in erroded, off camber rock slabs and rocks the size of babies! The options are endless, if you have the bottle, but for most people (myself included) its just a case of surviving from one mini disaster to the next. Everyone gave it a good crack, some pushed their bikes over a few sections but most of all we made it down and nobody died!

The climb back towards Hope through the trees gave us a brief respite from the wind. I think the wind must have been poked in the eye whilst we played with the beast, because when we re-emerged on the ridge the wind was angry, really angry! We sheltered behind a wall as we re-grouped then set of against the wind. The drizzle had returned and felt like hail as it whipped against our faces. Leaning at 45 degrees into the wind pedaling down hill was a new experience for Marjory and probably anyone who hadn't ridden in the peaks before! The route changed tack and once again the wind was on our back for the final descent. A fun rocky descent peppered with friendly walkers. With even larger smiles and the knowledge of a cafe only a few minutes ride away we trundled down the road.

Next stop Macclesfield pump track. All I'm going to say is that every town should have one of these. Sheppard, Marjory, Mark, Snell and myself were all ripping around this place, getting skooled by the local boys and girls. I love pump tracks. See macc-skate.blogspot.com for more info about the people who made it happen.