If you cast your mind back to the start of the summer you may remember seeing a website post about Fantasy Downhill Racing. Now I haven't been very good at keeping everyone updated on this but now that it is the end of the season (it finished ages ago!) I thought I should add up the scores and dish out the prizes.

Here are some words from Marjory to give you an idea of the years ups and downs from the point of view of a fantasy racer!

A year ago, the world of downhill was just a shadowy extremist activity out in the fringe of my consciousness. But when I heard about the Fantasy Downhill as a fund raiser back in March or April, I decided to enter a Scottish team and set about some research to find some riders. I started a thread on an mtb website: “Who can help me fulfil my fantasy?” Unfortunately, this seemed to have raised different expectations. However, thanks to the more sensible replies, I now had Cunningham, Cathro, Barnes and Lamb, and a LOT of money left over in my budget. So I went for an attractive French man to make up my team. Although national pride has its place it’s nice to have some winners, so after Pietermaritzburg I entered a second team featuring Justin Leov and Tracy Mosely.

I found Freecaster TV. I also discovered Rob Warner. I usually had to make do with re-plays but even so, watching your own riders brings added suspense and frustration and also, just occasionally, jubilation. As for Warner’s commentary – well, at first I thought he was just annoying and shouty. But after a while, grudgingly, I have to admit that the man began to grow on me. Who else could come up with classics such as “he’s gone down harder than the US economy”, “Steve Peat, he’s done for downhill what Osama Bin Laden did for terrorism”, “Fabien Barrell is so calculating he makes Socrates look like he has learning difficulties”, “he’s sweating like an MP with a second home”, “he should down a pint of concrete and harden the f**k up!” “he’s gone down harder than a s**t in a swimming pool”, “so many semi’s he’s sponsored by Viagra”.

So what did I get from the whole Fantasy DH experience? I watched world-class cyclists hurtle down the worlds’ toughest, most dangerous and exciting courses. Faces and names became a little more familiar. I became hooked on catching the next episode of The Atherton Project online, which was a great way to glimpse what life is like behind the scenes for some of the most famous names on the downhill world-cup circuit. There was a great variety in the courses from the dry and dusty opening South African tracks and World Championships in Canberra, to the more typical European courses such as rainy La Bresse and Maribor. Mud, rocks, roots – the skills on display really were awesome. Of course, one of the main highlights were watching our own Steve Peat become the winningest downhill racer ever and who could forget him winning his first World Championship after 17 years of shattered dreams.

The best indication of how much I was enjoying the whole new world of DH was that when my husband and I had an opportunity to spend a weekend away without the kids, I managed to persuade him that, forget Paris or Barcelona, the ideal mini-break destination would be Fort William. Oh, and yes, there happened to be a World Cup downhill event taking place there that weekend. But what an event! Minaar wearing his rhubarb and custard retro-suit. Wandering around the tented workshops waiting to catch a glimpse of team members. Sharing a chair-lift with women’s No.10 Emilie Sieghentaller up to the top of the course. Meandering down the Ben with the full speed and guts of the riders only inches away. Screaming till hoarse at the finish line. Justin Leov sitting on the hot seat for a teasingly long time. Absolutely brilliant!

Next year? I reckon only a fool would doubt Rachel Atherton’s hunger and determination to reclaim her top spot after a year on the sidelines. I reckon the smart money (i.e. Simon’s Fantasy-winning TLV Factory Racing) will be on Brendan Fairclough and Aaron Gwin to scoop up points. But nobody would expect world cup winner Sam Hill to hand over his title without a fight. Can Peaty let it all hang out in 2010 after this year’s massive achievement? I’ll let my team enjoy a well earned break, but then the Spider Patrol will be back next year with a vengeance. Oh yeah, in the words of Rob Warner, it’ll be “LOOOOOK AT THE T-I-M-E!!!”

Here's the final score board 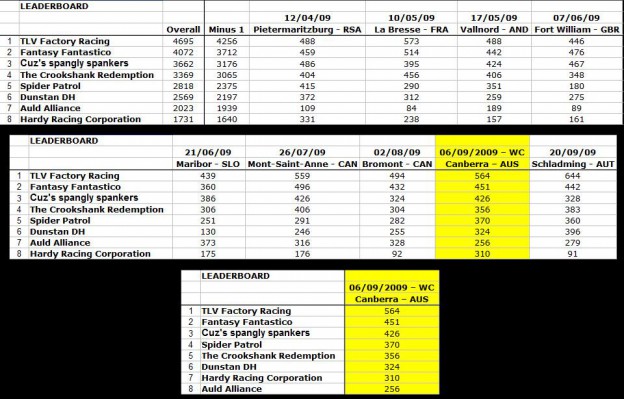 1st place in both the World Cup overall and The World Championships goes to TLV Factory Racing with riders Tracy Moseley, Brendan Fairclough, Aaron Gwin, Steve Smith, Sam Dale, Danny Hart and Gareth Brewin giving Team Manager Simon Truelove full bragging rights for the next 12 months and a total winnings of £9.60 (all of which will be donated back to the club).

Thanks for reading and here's looking forward to the 2010 race season.

Think you can beat TLV factory racing? – Get your money ready for the 2010 Fantasy Downhill Race season.