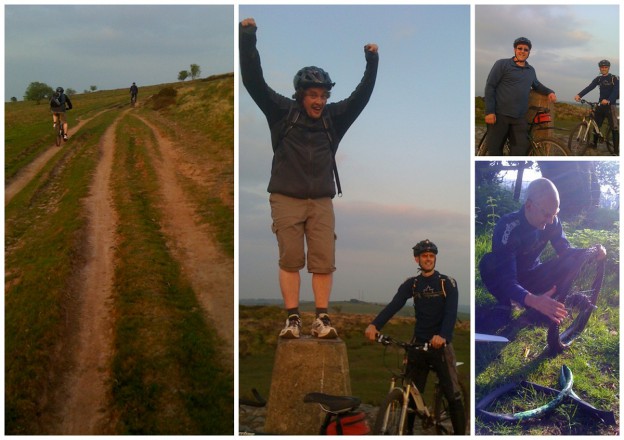 Last Thursday night three bike riders (I won’t use the word cyclist it would be an exaggeration) set off on a jaunt around the hills of Blagdon and Black Coombe.

We started out after a protracted journey due to road closures, and when we finally arrived were subjected to watching Malcolm screw even more bits onto his classic GT Timberline (1993)….prompting me to almost rip the allen key from his hand.

Well eventually we set off down Loves Lane (no really..it’s not a euphemism) to get to the bottom of the coombe, involving chucking our steeds over a couple of gates…which is where the trouble began.

I dropped the trusty Duster over the second gate, which was immediately followed by a loud bang and the rim dropping to the ground.

Dave nearly wet himself with laughter, and proposed that it was the enormous weight of my Alfine hub that had caused the tube to explode.

Personally I think it may just have been a dodgy tube…and was glad that it happened whilst stationary rather than on the cheese-grater style rocks of the coombe.

Any which way I was more than a little disappointed as it was a new Slime Tube that had just gone bang, and there certainly wasn’t any self-healing going on.

So off came the tyre, and out sprayedpoured the entire tubes worth of slime, what a mess…new tube in and off we set with me now looking like Shrek and the Duster having an interesting brown to green fade paint job.

The rest of the ride was far more fun with dry, dusty rocky descents mixed with a few whoops and steep climbs through the woods and massive grins all round.

Everyone felt chuffed to make it to the top of the coombe without bringing up a lung, and looked forward to the drop from the top back down into Blagdon.

Brakes off and down we shot, Malcolm fighting with his fully rigid GT, when we met up at the bottom his eyeballs were still bouncing up and down in his skull. In typical Scots fashion he dismissed the idea of suspension and put his blurred vision down to a lack of riding gloves….fair play.