BEHOLD!!! The Pub-Bike Of Doom… 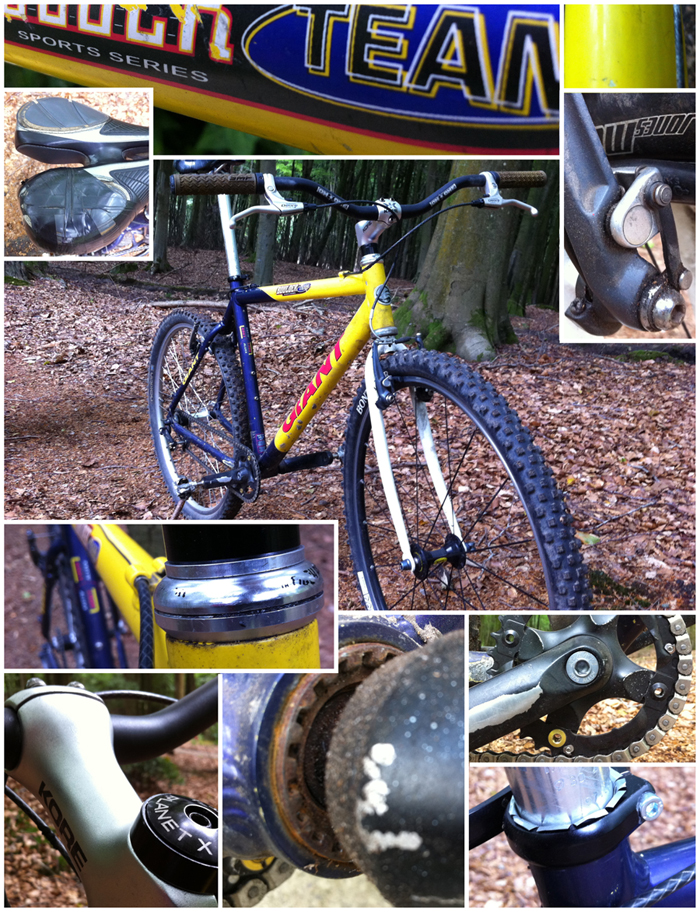 .
A recent glance round the Man Cave (my bike shed) and a quick stroke of the chin revealed two things:
1) I have too many bikes.
2) I have nearly enough spares to build another bike.
.
For those who don't know me, aside from the acquisition, riding and maintenance of bicycles, I have very few other interests in life. Two things which fall into the 'other interests' category are possibly "building bikes", and "cake".
.
I don't think I've ever bought a bike off the peg. For me it's way more fun to source the components independently and build it up myself. Somehow it will always ride better that way, and I can have every confidence in it having tightened every nut and fitted every component myself.
.
It's like making a cake (and like I say, cake is one of the other few thing that REALLY interest me). I make my own recipe. I source all the ingredients myself. I stir in the right... and bake it for... no, that metaphor is failing.
Anyhoo, the point is this.
.
By now I know what fits me and what works best. If I were to buy a whole bike, I'd only end up changing half the componentry on it. This way, I get exactly the spec I want and know that it'll be 'right'. I also really enjoy the whole process of the build. Breathing life into a pile of individual items, making the whole greater than the sum of its parts. Patiently fitting everything, never rushing. Getting oily in the shed. It's all good.
.
This latest build was bit different. All I was lacking was a frame. A mental check meant I (probably) had everything else I needed. A visit to eBay and a little patience rewarded me with an ancient-but-useable Giant frame in Chas size. It's been kicked around a bit, sure, but it's 6061 Alu and aside from the odd dent and scratch, it's rideable. To be honest, I don't think deborah5669 actually knew much about bikes when she placed her ad, otherwise she might have mentioned that the bottom-bracket was permanently seized in the frame. But then she probably found it in a skip and thought "I can sell that on the 'bay".
.
Still, for the princely sum of £5.61, I now had all I needed to complete a build.
.
Old headset that had been languishing on a shelf for a couple of years. No idea of brand.
.
Some old steel 'touring' forks. These are obviously for 700c so I'll have to stick that old Aksium wheel on there and call it a 69er. The rear wheel of that pair failed long ago so the odd front one has been in the attic for some time. Waiting.
.
Stem? Nasty old 3-bolt Kore thing. Old on-one 2" risers gave a goodly 28" of width. Ripe for singlespeeding. Mismatched v-brakes... managed to salvage front and rear from two different sets. Just about work fine. Cables weren't a problem. I always recycle old cables where possible. An old rear one, becomes a new front one. Outers were some lengths of old, braided gear outers off an old roadbike. Some old DMR brown grips completed the 'controls'...
.
The seized-in square-taper BB meant that the HT1 chainset (and BB) I had planned to use now wouldn't fit. Luckily, I had an old Deore square taper crankset. The lock-ring on the spider has 'play', but it's all staying in place. Not enough matching narrow chainring bolts, so a mix of colours and brands.
.
Rear wheel is an old v-brake-only Shimano thing. With a Mavic 317 rim. All silver to clash with a the all-black front wheel.
.
Seatpin? Well, I guessed that I probably had accrued enough shims over the years to get anything to fit. In actuality, I had a 30.4 seatpin which, when I fashioned a coke-can shim, fits the 30.9 internal diameter of the seat tube perfectly. It's only a 350mm, so legally it's way over it's "Minimum Insert" mark, though.
.
Surely I don't have a seatclamp that'll fit? Oh wait. Yes I do. Just needs a bolt. Ah. There's one.
.
Saddle was picked out of the bin. Literally. I had just thrown it away. After years of use/abuse, my not inconsiderable arse had finally split the covering. A yard of insulation tape soon saw to that, though.
A half-link chain, an old tensioner and some tyres of comparable width completed the build. I actually have enough parts to fit gears, but why on EARTH would I want to do that???
.
So, total cost of build: £5.61
Hacking through familiar, local, dry-and-dusty trails on a perfectly good rigid singlespeed bike for four hours on a Sunday afternoon: Priceless.
.
Sure, it's a little short in the cockpit, and it's a bit twitchy/light on the steering, but then it's old-skool geometry. It's fine. It's a bike. It goes and stops. No creaking, no rubbing, no rattling. Rides like a dream. I built it.
.
Yes it IS purple and yellow.
Tweet