A Ride With Bigfoot in the Forest

November 13th? More like September 74th by my reckoning. What was going on? Warm sunshine? Short-sleeves and shorts?? It was certainly an awful lot warmer and dryer than that June Ride-Away to Wooton-under-Edge (for which I am still receiving therapy, incidentally). We were in for an unseasonably beautiful autumn day in spectacular surroundings, and were about to enjoy miles and miles of wooded singletrack in great company.

I’ve been treated to the extensive and intricate network of natural, ‘hidden’ singletrack in the Forest of Dean on half-a-dozen previous visits (over 8 or 9 years ago now) and remember it as being superb. Ideally, however, you need someone with local knowledge to show you round its 40-square-miles, otherwise you may as well stick to the way-marked man-made trails.

13 Black Canons (Me, Mark A, Juliet, Marjory, Kevin, Simon A, Andrew, Mark P, Richard, Puffy, Ryan, Will and Simon T plus a couple of other joiner-inners) made the relatively short trip to the FoD, and met up with Jason and other members of the Bigfoot MBC at the Pedalabikeaway centre. Back in August they’d kindly shown us round their local haunt of Cranham Woods – a stunning and memorable day’s riding. The FoD is another local venue of theirs, and Jason – again our guide for the day – has considerable intimate knowledge of it’s trails.

Both clubs congregated around the café while late-comers faffed, and both clubs joined in on ridiculing my choice of bike for the day. The Black Canons were (again) alarmed at the amount of body-armour sported by a large percentage of the Bigfeet... What did they know that we didn’t? What had Jason in mind?? Why had I brought a rigid, singlespeed 29er with funky, windswept-and-interesting handlebars?? Why was everyone else on a six-inch-travel full-susser??

Soon the 30-strong group was heading out of the carpark and into the forest. At the start we briefly picked up on the old FoDCA1 route, one of only two man-made sections of trail we were to ride all day. The trails were muddy – deep in some sections, bone-dry in others – but perfectly rideable. And rooty. Very, very rooty. Most of the trails were well-used and the exposed, polished, wet roots demanded the rider’s utmost attention at all times. 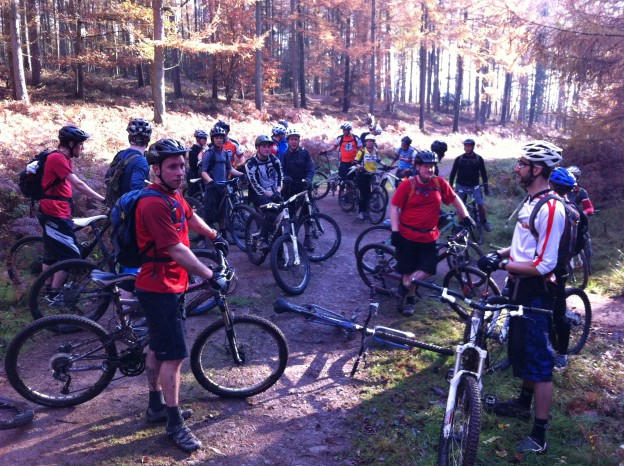 A pattern seem to develop whereby height was gained on fireroads or broad tracks, before darting off left or right down technical, flowing paths to another fireroad. A short, flowing, bermy section of the new Verders Trail was enjoyed briefly, its hard-packed stony surface making a welcome change from the muddy roots we were just getting used to.

As well as all the flowing, rooty singletrack, there were many interesting and tricky features to negotiate, and we were occasionally advised to drop our saddles. An awkward, longish, DH run, rutted and loose with 3 or 4 steep sections, caught several of us out and dumped a few riders on their backsides. All eyes on The Boy Chas aboard his clown-bike whose saddle couldn’t be lowered…

Nailed it. With not so much as a dab. *punches air*

It’s fair to say that most riders had at least one ‘off’ during the course of the day (except Ryan, annoyingly) but nothing too serious. I had a minor spill where a newly installed cleat refused to disengage as my bike glanced sideways off a root. The worst of the day was that of Old Man Daykin who inadvertently caught a tree with his handlebar at some speed and was sent sprawling. Luckily, this time he suffered nothing more than a banged knee and a bruised ego so there was no need for his usual trip to the geriatric ward of A&E. Twisted bars were soon rectified, but a mildly buckled front wheel will remind him to pay more attention while riding on a straight path in future. 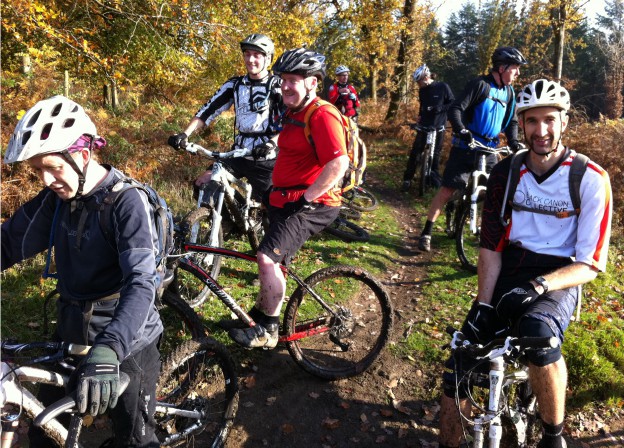 At roughly the half-way-point we were given the option for some of us to return to base. We were now heading away from the Pedalabikeaway centre and from here on, anyone who wanted to bale-out would have a long ride home. Our large group of about 30 was then roughly divided in two and both halves went their separate ways. Those continuing the ride were heading off for Dowies 1 and 2 – superb trails I’d ridden years before but had completely forgotten. More technical, flowing, rooty, muddy singletrack. Great stuff and hugely enjoyable. 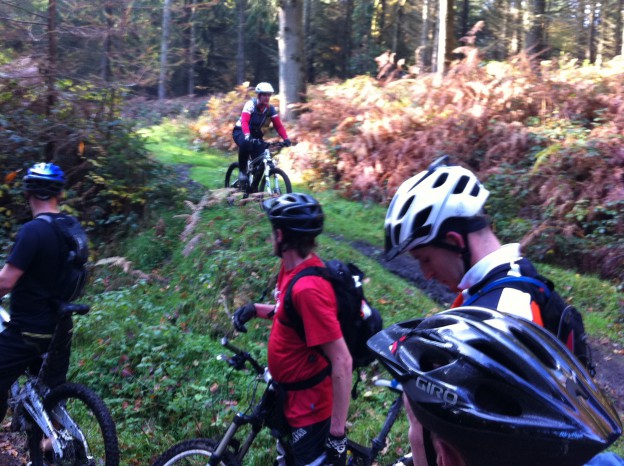 To complete the 4hr ride we took a flat cyclepath all the way back to Pedalabikeaway - perfect for spinning the legs out after what had been quite a workout. Simon T and his joiner-inner (Adam?) headed off on their own to do a complete loop of the Verders Trail. The bulk of us, however, arrived back at the centre, washed the bikes, then headed for the café for tea, coffee, cake and a watch of the Earthed 3 DVD. Will “Outside The Box’ Hardy staggered us all with a revolutionary new form of sandwich: the bacon and chip butty.

By the time we left the café it had pretty-much been unanimously agreed that it had been a great day out. One of the best Ride Aways for a very long time. Thanks to all BCC members who came along, and another HUGE thank you to Jason and the Bigfoot MBC for again sharing their expert trail knowledge. 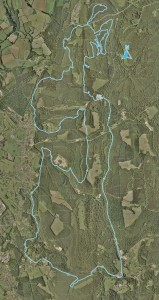