You know that feeling in the morning after a heavy night on the booze? Well, almost everybody who rode at the Ticker Tape had that feeling today (I have to thank Marjory for that, brilliant night, ta), Andrew Denham had to sit out. He had very little sleep and was still wearing the dress from the night before.
Looking around at the HUGE turnout for the timed runs I could see red eyes and tired faces. I immediately thought there were going to be some very slack runs.

The course had been re-routed slightly in-between the step-downs at the top and then back up the hill just before the rocks. This provided a high speed sideways experience all the way down and a number of line choices that could hack almost a second off run times. The rest of the track was running bone dry.

A look at our watches on our first lazy hung-over practice run showed just how quick it would be. Chris Smith and I had just over 32 seconds on the watches, the previous best from the last Ticker Tape was 32.08 by me. Rob Lewis had 30.60 on his. Game on!

It was a fairly relaxed affair all day with 40 second barriers being broken and everybody scoping lines in between runs. I have never seen so many people jumping the doubles, big shouts out to them.

We had loads more people there; Graham Cook, hungry from his Bath trails being ruined by R'tards, was shredding on his 10ft long Yeti 303. Graham, with a few others, built the step down on the track originally. New kid Daniel, only 7 years old and riding real fast. He is definitely one for the future and he has parents that have a brilliant attitude in supporting him in his riding and the millions of other sports he does too. More talent in Ed too. Consistent, fast runs and learning from every little mistake made. He didn't jump the doubles but was beating most who did. Ed received the Beans award of a freshly baked Brownie courtesy of my lovely girlfriend, Helen.

Right then back to the times.

Chris had a new bike, it was full on DH, set up like a jump bike. He was the one to beat after beating Rob's previous time. I then got under Rob's time then it was just between myself and Chris.
He got under 30secs, something I wanted bad, I got it. But soon after I set up his suspension properly he started thrashing me further (why did I do that?). He ended with a 29.38, over half a second quicker than me. I thought that was it, half a second was big. On such a short track, that is riding a cm too far from the line. I plugged out one more run at the last minute, 29.46. “Close but it's not the one” as Roy Walker would say.

Chris Smith was the recipient of the Ticker Tape sticker and I was beaten by a freerider. I have a bag of excuses but I may need them for some other time.

I wanted to say hello to everyone but those who were there know how busy it was. It was great and I can't wait for the next one.
Cheers! 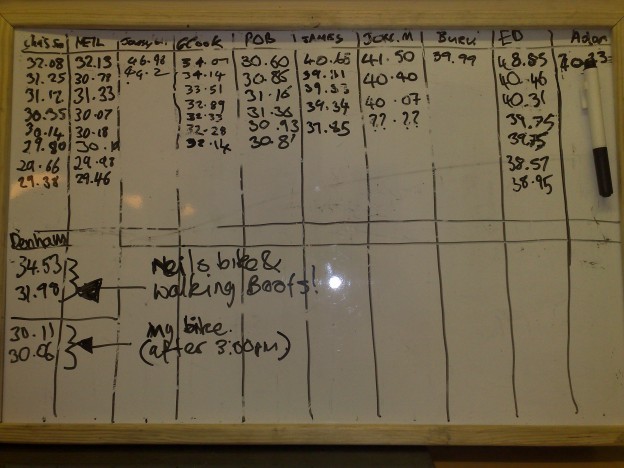