The Motley Crew at -2c

For this month’s ride away we visited Glyncorrwg Mountain Bike Centre, which is a guaranteed smile-enducer. Going on a ride away is always exciting as it gives you the opportunity to ride terrain that you don’t usually experience, it also gives Longleat a welcome break from the battering it has taken this winter.

We congregated outside the Cheese & Grain, and left fairly promptly, beginning the 2-and-a-bit hour journey to Afan Forest. The first thing we noticed on the approach to the centre was the devastation a tree disease has brought to the area. Phytophthora  Ramorum (The Foot and Mouth of the tree world) damages Larch trees, to the extent that they have to be destroyed so the disease doesn’t spread any further.

Everyone arrived safely and the usual pre ride faffing ensued, but in no time at all we were ready and headed off to the beginning of the trail. There are 3 trails that you can follow, at varying levels of difficulty and length. However they all start with the same, super steep, slog of a climb up to “Windy Point” where each trail goes it’s separate way.

Everyone reached the top fairly comfortably, with the only issue being Al’s amazing rotating bars which didn’t want to clamp properly, however this was easily rectified. We took a short break at the top before diving off down the Black run, which was made slightly more challenging by the presence of snow/ ice. The Black run is as technical as you want to make it, if you stay to the left it is a fairly tame trail with a few small drop offs. If you stay to the right though, there are larger drop offs but each have the option to go around them so everyone made it down unscathed.

There is then a short fire road section back to “Windy Point”, where we forked left and followed W2. It is an amazing trail that takes in some beautiful views, fast single track and even a few board walk sections. The North- Shore style sections struck fear into a few members of the group. It’s just a matter of making sure the rear wheel doesn’t cut the corners too tight, or you’re going backwards into the Welsh undergrowth! 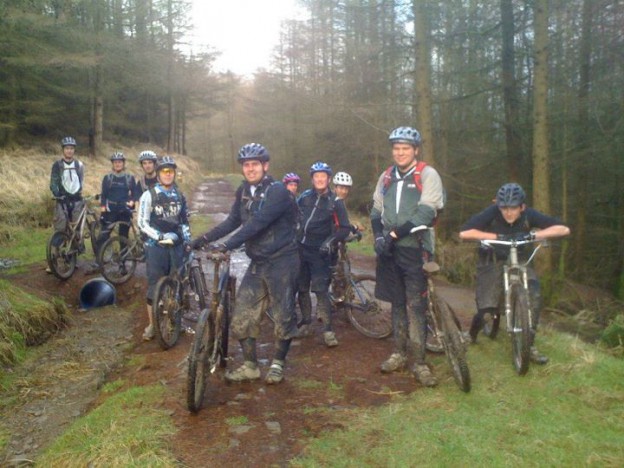 We continued to fly down the remainder of the trail, taking the additional features that can be found at fairly regular intervals to liven the descent up further. Everyone made it to the bottom with big smiles on their faces. We then made a B line to the cafe for some home made tastiness. Mark and Ian couldn’t resist the call of the another slice of cake and chose to stay longer, whilst the rest of the group began round two. Will, Ben and Simon decided it was a good idea to ride down the steep, narrow, icy steps rather than walking down (like everyone else). I knew it wasn’t a clever thing to do, but they made it down in one piece (just).

The climb up to the trail head was just as painful as the first time and we regrouped at the top. We were following the Skyline trail this time, which is the longest trail. But we decided to cut out about 40km of pain and jumped straight to the final descent. To get to the start of the descent we had to follow a few miles of icy fire road, although this provided a nice opportunity to spin the legs off after all the climbing. 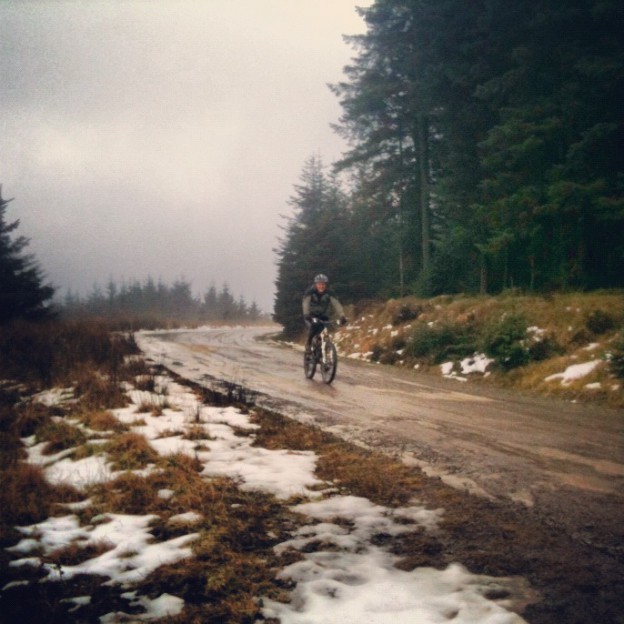 The Skyline Descent never disappoints, providing a challenging collection of features which give even the most seasoned rider something to think about. We gathered at the final stile and exchanged stories of icy near- misses before returning to the car park to pack the bikes away. After a quick change we went back to the cafe for more food. They offer a great selection of home cooked meals and cakes for us weary riders. Wales were playing Rugby so we took our opportunity for a traffic free return journey and headed home. Everyone enjoyed a full day of riding, which was made better by the fact there were no major mechanicals/ injuries.

Hope to see you next month.