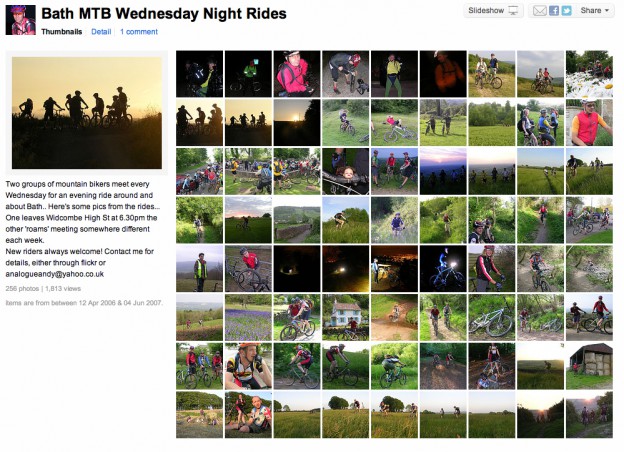 Last Wednesday evening, as part of my YSUYTAWSYO Inter-Club Exchange Programme (that's "You Show Us Your Trails And We'll Show You Ours"), I had the enormous pleasure of showing the "Bath Wednesday Night MTB" guys round our patch. Andy Stewart (old friend and organiser of the Midsomer Madness ride) very kindly copied me in on his ride report:

"Was that enough singletrack for you?

Yep, Chas’ ride turned out to be “all that it was cracked up to be” - he even delivered on the promised ‘warm, dry and dusty*’.

12 of us in all I think it was (Chas, Conrad, Tony, Will, Steve, Mat, Dave, Dan, Justin, Kevin, Lee and Andy). Lift sharing worked ok. Thanks to those who drove and took others: Justin, Dave, Andy. Even Tony managed to get to Widcombe for 6.15 😉 and we got away bang on 6.30. Conrad and Will made their own way and were late though so we didn’t get away until 7.15 which mattered as proved later we needed all the day light we could get.

Don’t ask me where we went but it consisted of all the best singletrack in and around Longleat with the odd bit of linky tarmac and fireroad, I reckon 80% was on tight, twisty, loamy, sandy, pine needly trails, squeezing between the trees in ‘just wide enough for your bars’ gaps. Plenty of swooping down and climbing up. With added views (we spotted Kelston Round Hill in the distance), water features and lakes.

Special mention must go to the XC downhill trail in their Allotment – by now it was properly dark and all bar the first few lost the line and ended up making up their own. Especially Dan who’s lights packed up! It looked mad from the bottom to see all these lights coming at us through the trees.

Special mention must also go to the “S&M Singletrack” – tight and twisty between the holly bushes. I was going to say I’ve never felt so many small pr!cks in one night but Chas had already accused us of being “the most gay group he’d ever ridden” with by that point 🙂

*Final special mention must go to Chas’ own version of ‘The Badger Run’ near the end – ours is guaranteed wet and muddy, his was sandy and rocky. I had fun trying to see (and breathe!) due to all the dust kicked up by those ahead as we flew down it.

Steve was carrying his new Go-Pro HD camera for the first time, strapped to his chest! He got 2 hours of footage so it’ll be interesting to see that.

Chas’ also mentioned their regular Tues night rides – 7pm from the Church in East Woodlands. You can ride as a guest but will need to join up if you plan to become a ‘regular’