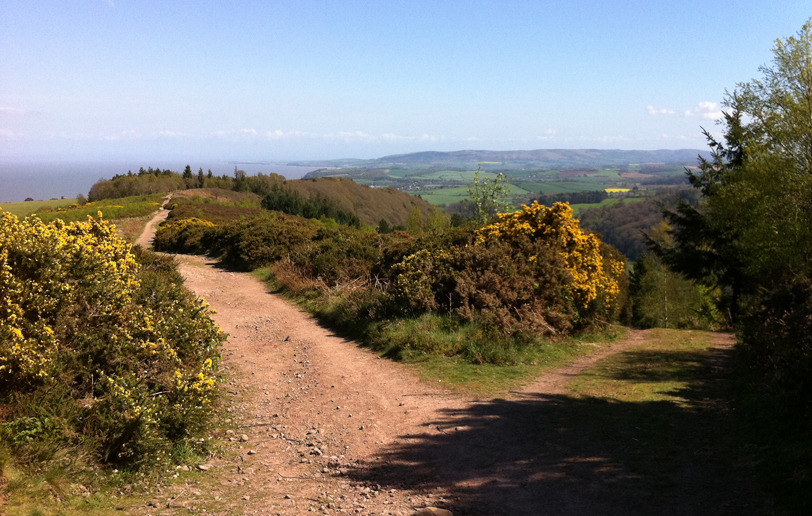 Small, but perfectly formed.
Ryan's choice of gears?
The area of Exmoor we went to?
The number of BCC members on last Sunday's Ride Away?
Chas' skill set?
All of the above, actually.
With no 'certified' Ride Leaders present for the first of this month's Rides Away, the club outing to Exmoor quickly devolved into a slightly less formal 'Forum Ride'. 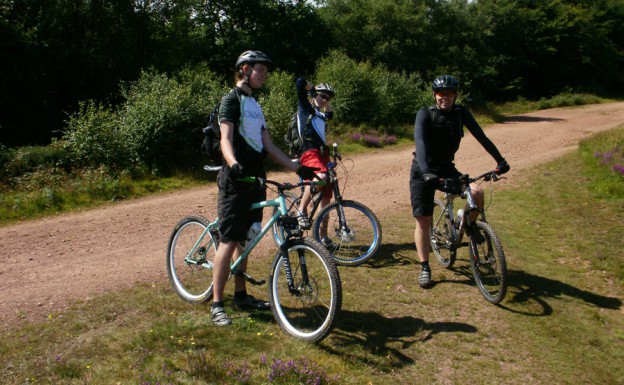 We few. We happy few.

Chas, Will and Ryan met in the Cheese and Grain carpark and made the 90-minute drive to Dunster, while Paul, holidaying near Ilfracombe, had a much more tortuous journey eastwards along the north Devon and Somerset coastal road, arrived nearly an hour late and successfully snaffled the last available space in the car park.
Chas explained that this small corner of Exmoor is a very steep-sided ridge with bridleways radiating from the the top in all directions. "There will be some pushing", he added.
The sight of our XC Rep in knee/shin and elbow pads had a couple of the more DH-oriented members of the group raising their eyebrows, but he explained he'd fallen-off on one of the descents on two previous attempts and was keen not to do so this time. As we all know, when you wear pads it increases your skillz. :Fact:
After some world-class pfaffing from Will, the party of four headed out of the carpark and immediately zig-zagged up one of the steepest climbs in the vicinity. Even the mighty Mr Noble would have struggled here (I think). After catching our breaths at the top, we aimed for the first – and worst – of the day's descents (the one which Chas had yet to conquer). Impossibly steep at the bottom, it's also very loose with no traction available nor any particularly good line to choose. At its steepest section, it has a 90-degree left-hand turn, and then a number of roots and trees to negotiate. With a cemetery conveniently situated at the bottom, Chas led the way down and – for the first time – actually felt in control of the bike on this his third attempt at this descent. But disaster; a dad and his two young sons were scrambling UP the climb just at the tricky left-hander. The cry "Dismount!!" went out and we all had to grind to a halt at pretty-much the steepest point. In a deft move, Chas baled-out off the back of his bike grabbing a tree with his right hand while catching his seatpost with his left. Skillz. Those pads were clearly working their magic, but success at nailing this trail would now have to wait till another day. 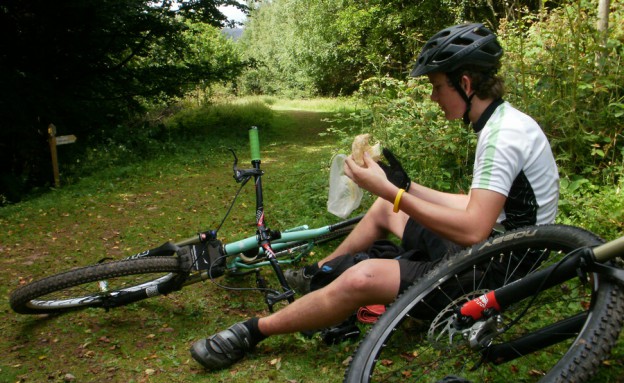 From the bottom a nice, rideable, rooty, singletrack climb off to the left brought us back to near the trail-head where a gnadgery, shortish drop with a steep, trough-y, switchback was the reward. Then began the long climb back to the very top where a wide path spans the length of the ridge. Off to the left from the ridge we took a Restricted Byway all the way down to the road. Fast, long, wide, stony and twisty with bermed corners, ditches and bedrock all the way. We wiped our streaming eyes at its foot and headed north along the road to pick up 'The Fireroad Of Doom' through a forested area, which would take us all the way to the top again. Over to the Northwest end of the ridge where we forked right and took a seemingly endless deciduous singletrack descent all the way down to the road again. Fast and straight-ish with obstacles to negotiate en-route, it got steeper and funner towards its end. More eye-wiping, whoops of enjoyment and excitable chatter at the bottom. 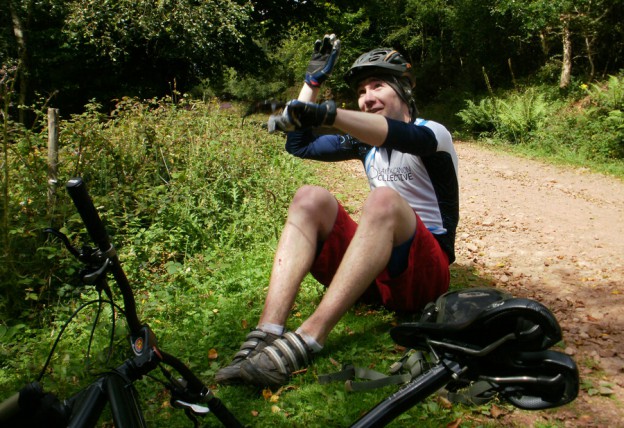 Will demonstrating his Fly Tai Chi

Another short stretch of tarmac to the left and we soon picked up another stony bridleway which would take us back to the top. Rocky and almost unrideable at the bottom, it soon levelled off a bit and we could ride back to the fork where we headed over to another descent, this time on the north side of the ridge, down into Periton Combe. A long, fast and fun singletrack path through woodland, a short climb, and then another grassy descent which steepened and turned rooty. Yet another hum-dinger of a downhill. 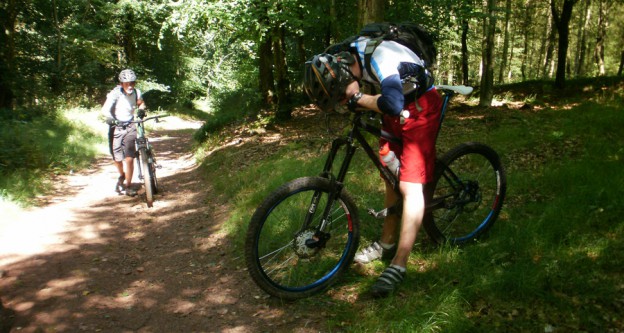 One of the many evil, evil rides/walks/pushes.

The less said about the next climb the better, really. Another evil, evil fireroad which twisted its bitter way to the highest point on the ridge at 300m. Occasionally it widened sufficiently to 'tack' up the gradient, but at one point we were all pushing. No shame there. From there we decided to call it a day but since our first attempt at 'that' descent (at the other end of the ridge) was spoiled by pesky pedestrians, we would have another go. So we took the gently-downhill, straight bridleway along the ridge – about a 100m drop in altitude over about 4km – to the top of the oh-so-steep troublesome one. Fourth time lucky, then? Some of us dropped our saddles (not for the first time today) and we headed off down the slope in procession, with Chas bringing up the rear.
Nailed it.
Chas arrived intact and beaming at the bottom (he *may* have done a small happy-dance at this point) only to find Will stretched-out and rubbing his knee. Apparently, in a fit of youthful exuberance, he had caught Paul up near the end of the trail, their wheels overlapped and Will, unable to stop, had taken a tumble. Nothing too serious - not even any broken skin. Just dented pride.
To sum up the ride in a small-but-perfectly-formed way: staggering climbs, awesome descents, amazing views, fantastic weather and dusty trails.
Special kudos and XC Beans award must go to singlespeed evangelist Ryan who attempted to ride (but didn't necessarily complete) all of the evil, evil climbs.
Nice ride, fellas.
Tweet