The day started fantastically, great weather and a spotless trail to mark... somehow Rob and I managed to make the 500m role of course marking tape last 450m's meaning that we had to get creative if we were to give the illusion of a fully marked course. Seemed to work though as no-one said a thing.

The format was same as always - 1 taped course, plenty of freelap watches, a white board and some good old fashioned competition.

BBMS was riding faster than ever, and it quickly became obvious that the day was gonna see some new PB's and potentially a new track record! 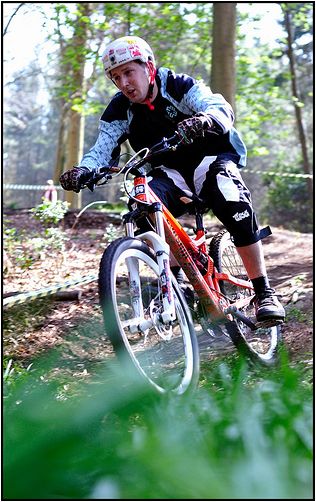 Some of the highlights were Ben Irons frantically dancing to the jingle of the Morris dancer bells he 'd strapped to his arms as every rider rode past, James Richards riding the log drop like a man possessed and and Robert Bunce showing more stamina than anyone else ( racking up 8 timed runs).

Chris Smith managed to set a new track record: 36.13, before braining himself on a rock. Pretty selfish really as I'd just managed a 36.48 and was pretty flippin' intent on celebrating rather than wiping blood off of his face and telling him "you look fine mate, really, it's not that bad..." typical pro; all about him!

The day ended pretty swiftly after the sabotage crash (seriously, his last run was timed at 8:10), but it had been a great day.

James Richards won the prize for "giving it beans" after riding with real commitment, showing that he's got the skills just needs to let them out. Closely followed by Robert Bunce who really put the effort in on the day.

The spot prize was won by Adam, the stealth rider amoung us, quietly going about his business getting his lines sorted....won't be long before he starts posting some fast times.

Both James and Adam won a bottle of Fenwicks bike cleaner.

Check out the white board to see how people got on.... 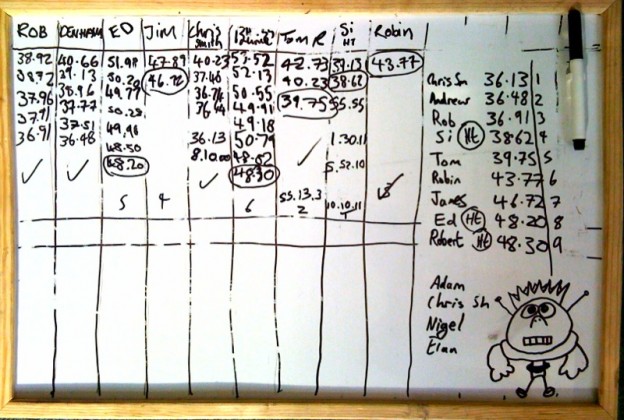