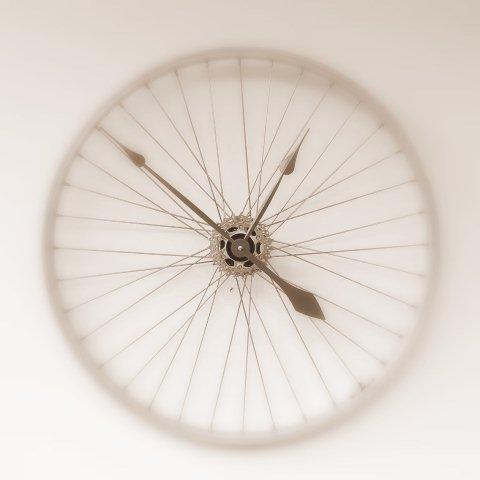 I was looking at my calendar the other day (it’s a lovely BCC 2011) when I realised we were in March and I hadn’t flipped the page over, apart from admiring the great shot of Ben Batt man-handling his bike down a dh course, I immediately checked my watch to see if it was also showing the correct date.

I did this because it’s mechanical and not particularly fancy, but I had this sudden realisation, the sort you get when something you normally take for granted makes it’s presence felt (like your car not starting, or your oven blowing up).

I realised that I had this tiny little machine strapped to my arm, which somehow without being aware of all the other millions of similar tiny machines in the world was beating along with them, with remarkable synchronicity. The more I thought about it the more I wondered how we had been able to create such amazing machines over the course of the last few hundred years.

I tried to imagine a world without well measured time, and began to appreciate how much we all depend on these boxes of cogs and springs (ok I know they are mostly digital now, but the principals are the same).

The human mind is an immense and sometimes apparently random thing, with seemingly uncontrolled chains of thought, so my brain jumped to thinking about if there are any other machines that have impacted us (humans) in similar ways, and top of my list unsurprisingly was the bike.

I considered the bike up there with the chronograph for many of the same reasons. They are both fundamentally a collection of simple mechanical and physical principles. They both need to be brought into the world with a great deal of engineering precision and skill if they are to function. Both have carved themselves a niche as machines that we depend upon, both have provided engineering firsts that have been utilised elsewhere.

But I’m not sure that was enough of a tie for me, there was more, there was a personal element.

There was this notion that I could almost use the bike as a time-piece for my life, I know it sounds crazy, but it’s like I can remember every bike I have ever owned, and have vivid memories associated with my bike time-line.

It’s as though bikes and cycling have been counting my seconds for me, from my first pedal stroke right up to now.

I can clearly remember my Raleigh Tomahawk followed by a Chopper and moving on to my metallic blue Eddy Merckx race bike and that was just the start.

But it’s more than just about a succession of machines it’s more about the experiences associated with them.

From getting my first BMX (Coventry Eagle) and riding on acres of frozen marsh land, to having my Fat Chance Wicked stolen at gun point, to riding my first downhill bike in the alps, to weekend trips away to ride in Delamere forest with my mates. There are so many finite memories you’d be bored to death if I even attempted to list them all, not to mention the paltry four hours battery life I have left on this computer.

I think what I’ve realised is that actually it’s the people that this interest has allowed me to stumble into that’s been the important thing. I consider that all of my ‘proper’ long term friends were met through cycling, and hopefully this shared interest will lead me to making a few more.

Along the way I’ve subverted new friends, girlfriends and colleagues into cycling. Sometimes I feel a little guilty, subconsciously am I trying to just get myself some more riding buddies?

I don’t think so, it’s like I get so enthused I want to share the experience, and well if that takes a bit of arm-bending so be it. I reckon that it was a worthwhile cause if one person has stuck with it, and they enjoy the experience half as much as me.

So to the future, I hope that my time continues to be measured out predominantly by the bike, and maybe less by the watch (although I am typing this sat in a hotel room on a work related assignment).

I also believe more strongly than ever that the bike is going to become an increasingly important machine, rather than being overshadowed like the chronograph by quartz.

I only have to look out of my hotel window and see the ever increasing number of commuters on bikes, the corporate backing of cycle hire schemes from retailers and banks, and on a more global scale the dependence of developing nations on cheap easily maintained transport and efficient sources of human power to feel confident in this amazing machines longevity.

For me personally I have discovered my own time-machine, it’s got pedals and whole lot of future.