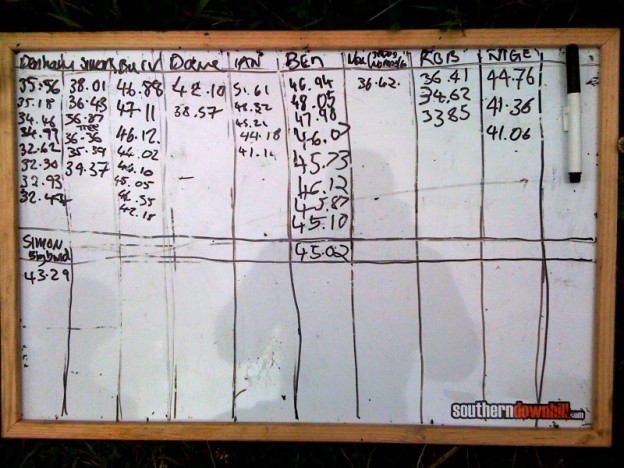 For many gravity athletes the prospect of tackling the fast, rooty corners of Spoons in the wet was too much, but not for one-time Tickertape Champion Andrew Denham who rampaged to the win with a sub 33 second run that obliterated his challengers.

The run was made especially impressive by the introduction of a huge new raised rock garden ('Boobs') built the previous day, with the determined labour of Josh and Ben being key to it's construction (along with the vision of Neil “One Run” Cousins).

Ben - a Sutton Veny native - also excelled against the clock with his determination and continual improvements (only challenged by Burv) winning him the coveted 'Beans' award (and an Eastpak wallet). Unfortunately for Josh he did not find Spoons as easy - his near slick tyres and unconventional set up hindering him in technical sections, but not from going large of every jump at every opportunity.

Several riders set times early then left, confident their times would put them on the podium, sadly for both “Waterproof” Dave and 'Big Bird' this wasn't to be.

Another competitor was SouthernDownhill.com owner (and prize donator)'Straight Line' Lewis whose disgust at being unable to challenge for the win led to him only revealing a couple of his race times.

Meanwhile while some riders were aiming for speed, others were aiming for style - Simon with his 180 degree high speed skids, Nigel with his (circa 1999) Rocket Parts gloves and Daniel who received copies of Fastlane mag for being a pinner, not to mention having his own pit crew and media team.