I can sum up August’s Ride-Away in two words.

There. Write-up written. Thanks for looking.

Longleat’s trails have already returned to their ‘Winter setting’, and after slogging round their deep, sandy gloop on Saturday, I was resigned to putting the mud-tyres on for our club visit to the woods around Cranham the next day.

As part of my very informal trail exchange programme with other MTB clubs in the area, we were to be guests of Bigfoot MBC, a large and very active club based in Gloucester. Nine BCC members (Steve, Simon, Kevin, Will, Andy, Ryan, Pete, Sean and myself) met with 12 of the Bigfoot clan in a pub carpark on the A46 just north of Painswick.

The woods around Cranham are their local patch. And what a patch. A large, deciduous, not-too-steep-sided area to the east of Gloucester…. And absolutely stuffed choc-full of sinewy, natural singletrack and interesting features.

To my astonishment, it seemed that all the rubbish weather we’d had this summer (especially recently) had completely bypassed this corner of Gloucestershire. We were treated to three hours of the most amazing, hard-packed, dry, dusty – and above all fast and flowing – singletrack. And all in stunning condition with nothing badly overgrown,  and nothing unrideable.

We got our accidents and mechanicals out of the way early on. With a fast-moving group of 21 riders – half of whom were on unfamiliar trails – there were always going to be a few problems. Will had a worrying spill at the bottom of the very first descent, spectacularly going over the bars. Thankfully he was a just a little shaken and suffered nothing more serious than a squashed banana and a bent saddle-rail to show for his acrobatics. A singlespeeder’s chain snapped on the way back up. Simon suffered pedal-strike shortly after and toppled over sideways. A Bigfoot went over the bars in the bottom of a deep bombhole, his forks compressing to the max catching him out. A tyre was gashed at about the same time as someone’s freehub expired. The second-half of the ride went hitch-free. 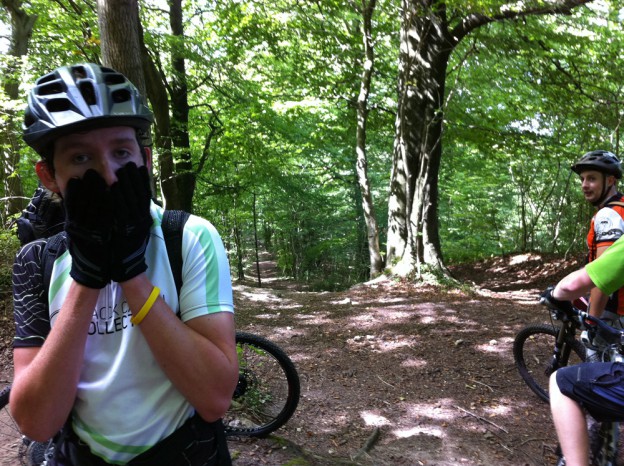 Ryan in shock and awe.

These outstanding ribbons of singletrack seemed to go on forever. Due to some trick of the local topography, the downs seemed to be an awful lot longer than the ups. Throw in a drifty corner here, a little kicker there, a steep-sided bomb-hole over there and a short/sharp climb way over there, and you’ve got some world-class XC stuff that many man-made trail centres would be envious of.

After an hour or so we all stopped for a breather at the top of  Coopers Hill – the famous cheese-rolling hill – and admired the stunning views over to the Malverrns. According to local MTB folklore, some one HAS managed to successfully ride down the near-vertical grassy slope. 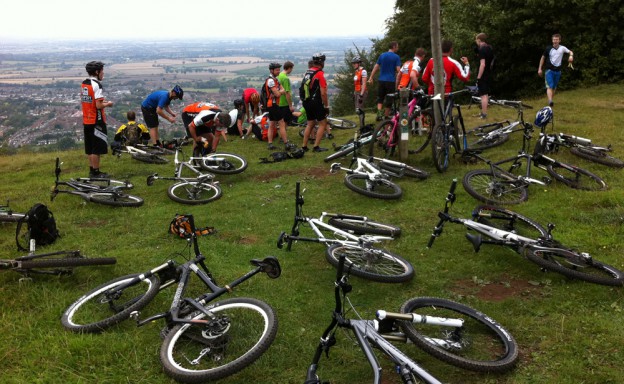 After another hour of more singletrack we were led to a little jump-spot where the Yoof amongst us amused themselves briefly on a series of smallish dirt ramps thrilling us oldies with their low-phat air.

We headed off again and had ­– yep, you guessed it – about another hour of yet more singletrack. Eventually our time was up and we were about to head back to the pub. A number of our party were beginning to reach their limits, and at this point I may have cajoled our guides into showing us a few more trails instead of taking the road back to the pub. Glad I did.

What a ride. 99% flowing, woodland singletrack. Over three hours of it. Seriously, 99%. 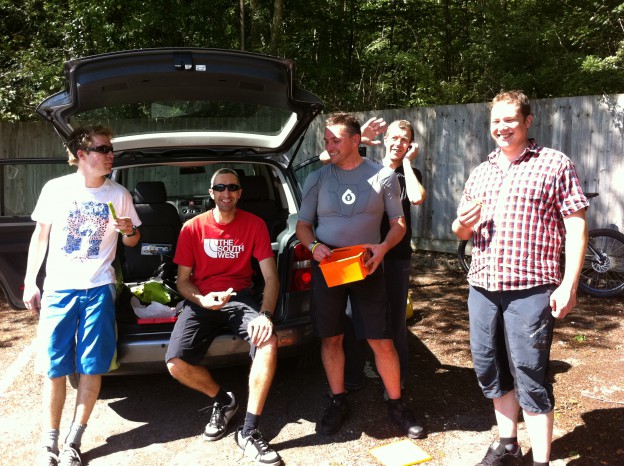 Oh and the sun came out too. Quite possibly, the best ride of the year for me.

*HUGE* thanks to Jason and the Bigfoot MBC for a great day.