6am Saturday morning and i am awoken by the all too familiar shrill, electronic tone of my alarm. Meaning i have to drag my poor old bones out of bed and pack my kit ready for this Month’s ride away to Afan. After a bacon sandwich and a can of red bull i am a little more lively and head off to meet Will at the pre-determined rendezvous point. Will was a few minutes behind schedule, giving me some time to realise the scale of the task i was about to undertake, dragging a 38lb DH bike around Afan’s notorious trails. But it was too little too late and we were on our way.

A faultless journey led by TomTom had us arriving in record time, only being beaten by the speed merchant that is Marjory. Whilst waiting for the others to arrive we had a poke around the Skyline bike shop and snapped up a few bargains. By this time everyone had congregated around the cars and were beginning to unload and piece together the 12 bikes, owned by our congregation: Will Hardy, Marjory Hatvany, Steve Corner, Sharon Loader, Chris Sheppard, Chris Snell, The Amors, Mark Vose, The Tileys and myself. Excited chatter ensued as serial faffer Will made some final “adjustments” to his bicycle and we made our way to the climb. 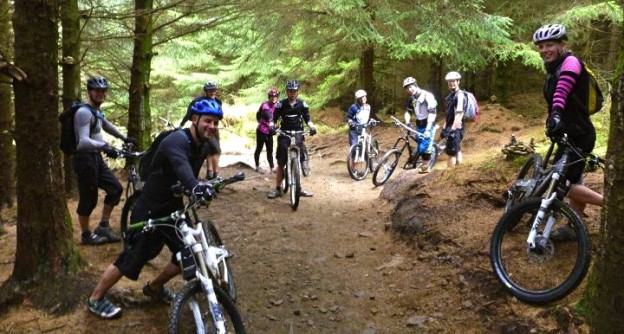 As ever the climb was challenging and slippery but we all made it to the top with little fuss (but much effort). It was at this point the group split, those who wanted to do the Black Run and those who would prefer to continue with White’s Level. Led by Chris Sheppard, Will, Rich, Steve, Marjory, Chris Snell and I made our way over to the Black whilst the others followed the rest of the trail. To begin with i thought the Black had been mis-graded, it was fairly straight forward. It wasn't until we got to the final section that i realised why it had been graded. A short, very steep section of sharp rocks and steps to negotiate. Sadly my enthusiasm outweighed my ability, all leading to quite a spectacular crash (reportedly) with an audience of 20+, luckily only a dead leg and dented pride were found in the aftermath!

After a short fire road climb back up to the trail head we re-joined the White’s Level trail and began the hunt for the splinter cell group. A few minor incidents were had along the way, including Rich sliding off the trail and Will having a little moment but we made it down in one piece. We regrouped in the cafe, trading stories whilst taking on much needed coffee, beans on toast and sugar.

It was time for another lap, sadly Juliet decided to sit this one out due to a recurring injury (or the fact it had started to rain), so we put our coats on and headed off for another dose of pain... i mean fun! It shortly became too much for Steve who decided to call it a day, but left with a smile on his face after breaking in his “virginal” new bike. So the rest of us assumed our positions and began the slog back to the summit.

The plan for this lap was to do the Skyline decent, without having to endure the other 45km that makes up the trail. So a stretch of fire road brought us to beginning of the decent and after a little more faffing we were on our way. Chris made us aware of some rock steps, just so they didn't come as a complete surprise.

It turned out there was another set that had slipped his mind, but they weren’t a problem for our trail centre veterans. We regrouped on a tight switchback to relieve the claw-hands that were rapidly developing and make sure we hadn’t lost anyone. As we were setting off, Rich decided to experiment with a new line, whilst still doing the SPD dance with his right foot. At this point the bike slipped from under him and he is greeted by a large boulder. He was now initiated into the dead leg club who’s numbers had now doubled to two (Myself and Rich). The rest of the decent was a howler, rough, flowing and exposed. This is the ONLY time i was happy to be riding a Monster Truck, the extensive travel made the decent a breeze. It was definitely the best decent of the day, and a perfect note to finish on.

We met back with the well rested Steve and Juliet, packed the bikes back into the vehicles and headed towards the showers/ cafe. The shower token system caused confusion, with the signs differing from what the receptionist said. It all got figured out and it gave us a chance to wash away the Welsh clag and investigate the war wounds we had picked up along the way.

Back into the cafe for more coffee, sweets, Beer (Snell) and a flick through March 2009’s issue of MBUK. We said our goodbyes and made our way home. Will and I spent the return journey exploring the classics on my iPod! Will was exceptionally good at singing duets with the likes of Justin Timberlake, Nelly Furtado and Will’s favorite... N’DUBZ 🙂

Good ride was had by all, Thanks for organising it and i look forward to next month!