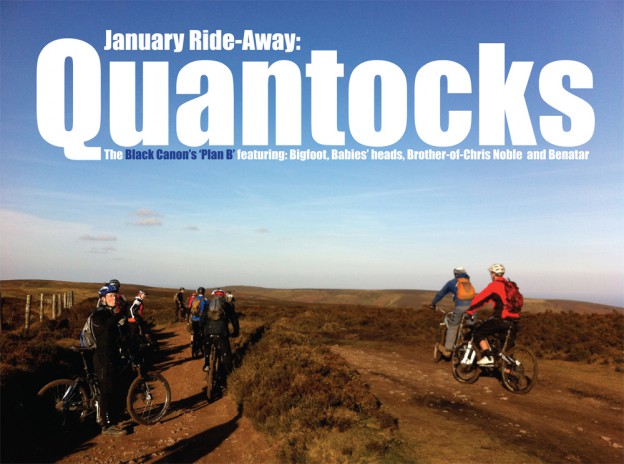 "We'll give her till ten past" was the decision made in the Cheese & Grain car park just prior to our departure for this month's ride away to the Quantock Hills. At 8:09am Sharon pedalled into sight and by 8:10am we were all on our way. Phew.

During all the nervous foot-tapping and watch-glancing that preceded Sharon’s arrival, Ryan, after a great deal of deliberation (in a rather fetching 'jim-jams and festival hat' combo) finally settled on his tyre choice for the day and fitted them. Again. And then promptly changed them again in the car on the drive down.

The short journey to Holford was uneventful, save for the five lucky occupants of Geraint's Fun Bus being treated to some of the finest pop hits of the 80's, courtesy of Chas’ iPod and a compatible lead into the van’s ICE system. Contrary to popular opinion, he maintains that a little Pat Benatar turned up to 11 is the perfect hors d'oeuvre to a four-hour mountainbike ride. 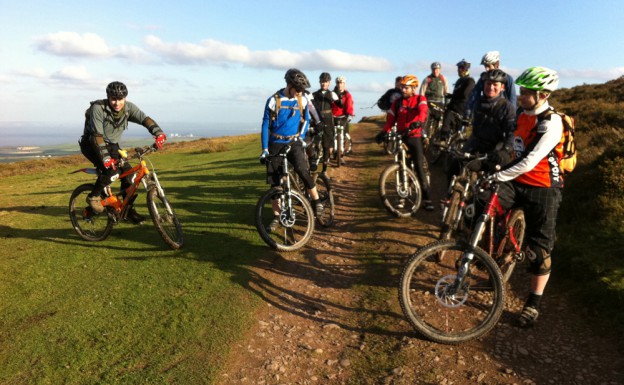 By the preceding Saturday evening the ‘Plan B’ ride had evolved into a ‘Plan C’. Wary of the fact that many of those riding on Sunday would be new to the Quantock Hills it was thought best to include as many of the old favourites and highlights as possible, and to save most of the alternative ‘new’ bits for another visit.

11 Black Canons met with five Bigfeet in the Holford layby. The Bigfoot MBC were planning an excursion here anyway and, curious to see any alternatives to their usual routes, had asked a while ago if they could tag along on our ride.

The Quantocks’ trails always hold up well in the winter and didn’t fail to impress yet again. The first evil climb of the day was nailed by just a few and sent a stark warning to most of us as to just how… erm… ‘hilly’ these hills are. An Evil-O-Meter™ was then established with climbs graded on a one to ten scale: one being ‘evil but manageable’ and ten being ‘the purest of all evils’. Most climbs thereafter were between 8 and 10. 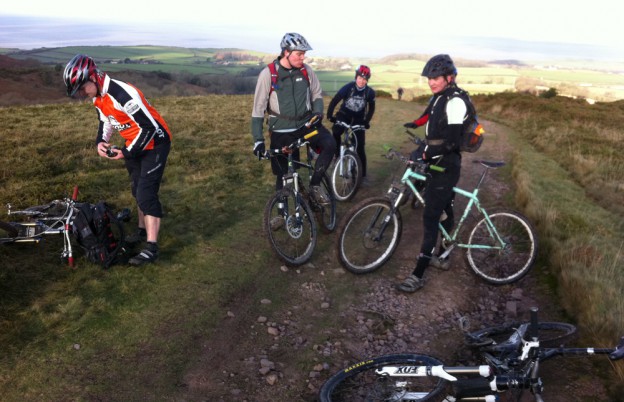 An entirely new descent was the first of the day. Starting fast and grassy, the Devil’s Galloping Path (real name) soon dissolves into a twisting carpet of loose rocks the size of babies’ heads covered in leaf litter. Add a smattering of roots to glance off and a fallen tree to limbo under and you have a great new addition to any Quantocks route. All riders made it safely to the bottom, most of them randomly pin-balling their way down with their eyes shut.

There then ensued the usual pattern of any Quantocks XC ride: climb/descend/climb/descend repeat until you can taste blood. Highlights of the day included: Weacombe Combe with its winding narrow singletrack; Smith’s Combe with its steepness, looseness and stream-crossings; the descent from Dead Woman’s Ditch with it’s rocky trench and narrow drop-offs; and Holford Combe with it’s numerous line choices. Even the climbs back up from those trails, though never easy, are always worth the effort. A small price to pay for fantastic, natural downhills.

En-route to the last descent of the day we passed a weary looking bunch who looked a lot like SPAM members. Their number appeared to include Mr Noble’s evil twin-brother sporting fluoro Oakley Jawbones. Our Chris would certainly never wear anything that garish. 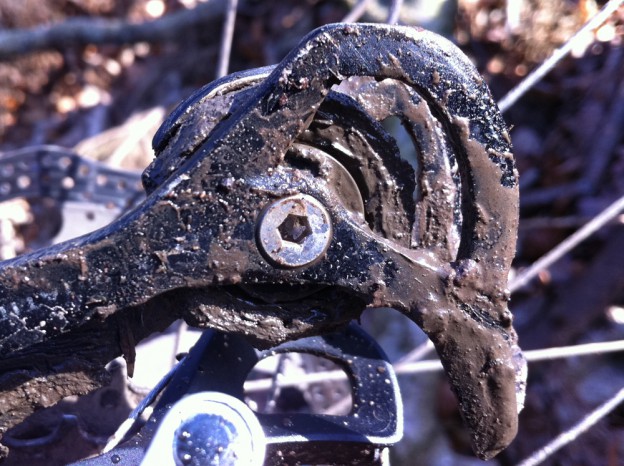 Isn't that supposed to have SOME teeth, Geraint?

Given that we had 16 riders in our group, mishaps and mechanicals were thin on the ground: Geraint’s tired chain snapped under the vast amounts of brutal torque he generated grinding up a short-but-steep climb, and there were a couple of punctures to interrupt the sweet flow of Smith’s Combe. A few riders confessed to going sideways occasionally but no one had any spectacular offs (that they were prepared to share with the group, anyway).

In short, we enjoyed a day of spectacular weather, amazing scenery, brilliant trails and great company. 18 miles of off-road riding in 4 hours (and 3,000ft of climbing) might not seem very much but as ever with this jewel of the southwest, the Quantocks is all about quality, not quantity. Quantock quality.